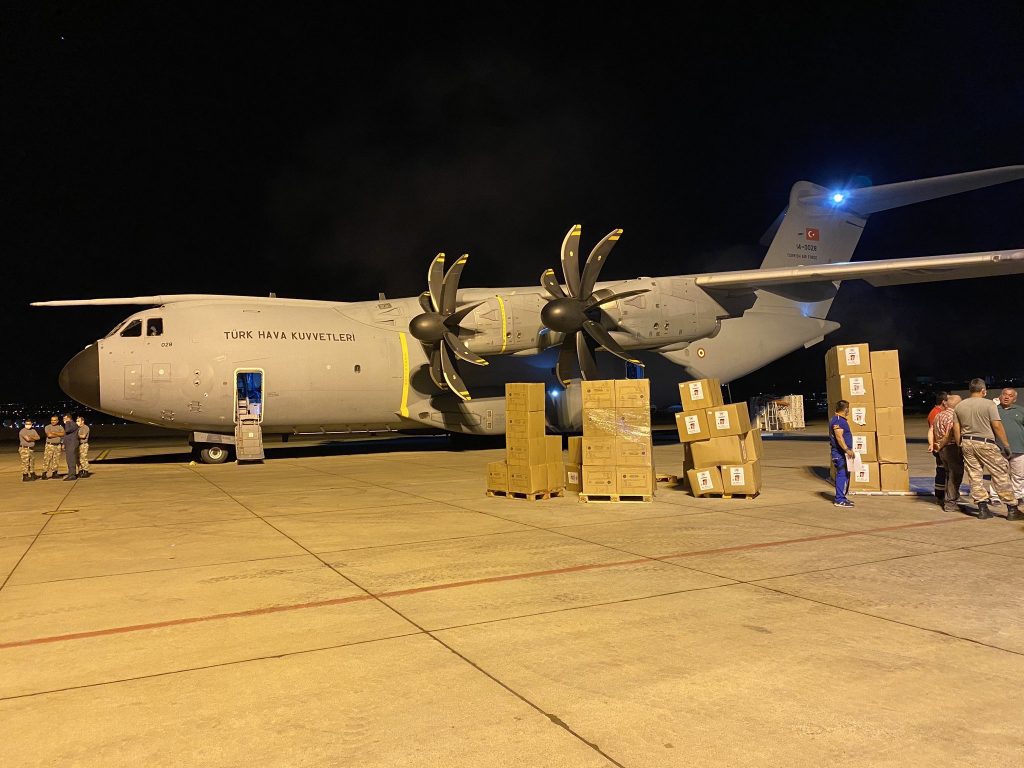 Turkey’s Disaster and Emergency Management Authority (AFAD) is overseeing urgent medical and humanitarian aid to Lebanon following a deadly explosion at the Port of Beirut on Tuesday, which left at least 137 people dead, and an estimated 300,000 homeless.

Details were announced by Turkish Health Minister Fahrettin Koca after he spoke on the phone with his Lebanese counterpart Hamad Hassan.

On Wednesday, a Turkish team of 20 physicians travelled to Lebanon. A Turkish military plane (pictured above) also flew search and rescue teams to Beirut, along with emergency humanitarian aid containing medicine.

The Turkish Red Crescent forms part of the AFAD Turkish response team too.

A spokesperson for the Turkish government said it is planning to establish a field hospital in Beirut to support frontline medical treatment for the thousands who were injured in the huge blast.

Ankara is also shipping 400 tonnes of grain to help offset a severe shortage in the city after the destruction of grain silos in the port, located next to the warehouse at the epicentre of the explosion.

The multi-tiered support comes after Recep Tayyip Erdoğan instructed his government to “stand by Lebanon”. The Turkish president has pledged humanitarian aid and healthcare to the Lebanese people.

The capital of Lebanon was left devastated after the detonation of 2,750 tonnes of ammonium nitrate in a warehouse in the Port of Beirut. Initial investigations suggest that a fire in the warehouse triggered the ammonium nitrate, which had been stored there unsafely for the past six years.

The photographer who trying to document this video he died #BeirutBlast #Beirut pic.twitter.com/UX6CIi583r

The chemicals, used for fertilisers and explosives, created a blast so large that it was felt as far away as Girne/Kyrenia, in North Cyprus, located some 159 miles away. Seismologists at the United States Geological Survey said it was the equivalent of a 3.3-magnitude earthquake.

Lebanon was already experiencing a severe economic crisis that had left 35% of the workforce jobless and half the population living below the poverty line. The coronavirus pandemic had further stretched the country’s resources and financial problems.

Some 82% of Lebanon’s imports and exports, and 85% of its food supplies are transported through the Port of Beirut. Repairing the damage caused by the blast to the port and city is likely to cost between $3 billion and $5 billion.

Lebanon’s capital #Beirut devastated by a massive explosion as an eyewitness describes the scene “like an apocalypse.”

Messages of condolences and solidarity were sent by the Turkish President and his Ministers, as well as from Ersin Tatar, the Prime Minister of the Turkish Republic of Northern Cyprus (TRNC), and TRNC Foreign Minister Kudret Özersay.

They echo messages and aid from other world leaders, including the British Prime Minister Boris Johnson, and France’s President Emmanuel Macron. Both countries have offered millions of pounds of aid to Lebanon.

Germany has already dispatched fifty search and rescue specialists to the country to help in the race to find survivors trapped beneath rubble following Tuesday’s explosion.

Jordan and Kuwait have also sent aid and medical staff, while Australia has pledged £1.4 million towards Beirut’s relief effort.