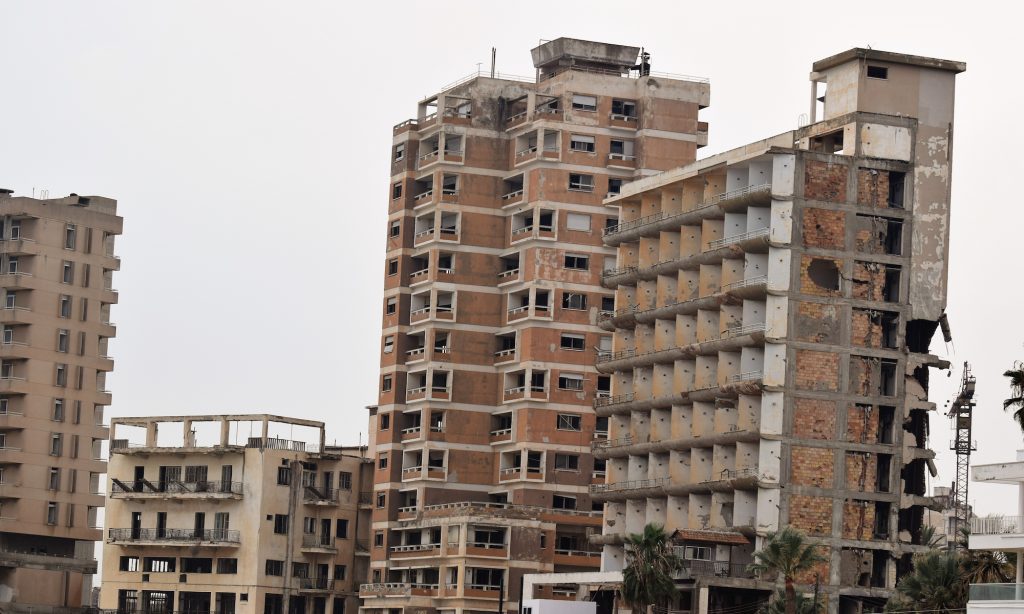 The re-opening of Maraş / Varosha, a popular seaside town on the eastern coast of Cyprus that was abandoned after the 1974 War, moved a step closer at the weekend after senior officials from Turkey and the Turkish Republic of North Cyprus (TRNC) went on an inspection visit.

They were met by Major-General Sezai Öztürk of the Cyprus Turkish Armed Forces (KTBK), whose troops patrol the fenced-off area.

The delegation later joined TRNC Prime Minister Ersin Tatar for a one-day conference discussing the legal implications of re-opening Maraş / Varosha, which was once home to 39,000 Greek Cypriots.

Momentum is growing on the Turkish side for the derelict town to be rebuilt, as part of an “historic” opportunity to bring tourism and economic benefits to the region.

During an interview with Turkish news broadcaster NTV ahead of his visit to North Cyprus, Mr Oktay said: “Maraş is Turkish Cypriot land. Now it is necessary to remove ‘Closed’ from [the town’s name of] Closed Maraş”.

Following his tour, the Turkish Vice President told media: “Keeping this coast of paradise under the sovereignty of the Turkish Republic of North Cyprus idle is not acceptable legally, politically or economically.

“There is unfortunately an abandoned area here as well as rotting buildings. Our hope is that Maraş is revived in a way that will revitalize the economic, trade and social life here,” Mr Oktay added.

Fikri Toros, an MP for the main TRNC opposition Republican Turkish Party (CTP) and the spokesman on foreign affairs, countered enthusiastic statements from Turkish officials about the town’s re-opening by reiterating the limitations posed by UN Security Council resolutions on Maraş.

“UN Security Council resolutions 550 and 789 set out the framework for Closed Maraş, stating under what conditions the region can be opened before a comprehensive settlement [to the Cyprus Problem is realised].

Mr Toros stressed that the UN Security Council resolutions are akin to “international law” and that, “Closed Maraş can only be opened under UN administration and by returning the property to its legal owners”.

A legal battle is currently underway between numerous Greek Cypriots, who owned land and property in Maraş before the 1974 conflict, and Evkaf – the Cyprus Islamic Trust. The Trust asserts its ownership rights to most of the area, and claims that much of its property was plundered by the British after it laid claim to the island during the First World War.

The CTP MP, whose comments appeared in Yenidüzen newspaper, also stated that:

“The [TRNC] President, who has been elected by the free will of the Turkish Cypriot people, is authorised [by the TRNC Parliament] to negotiate [at the Cyprus Talks] and is the only interlocutor of the UN through his status of “Community Leader”.

“The Council of Ministers can reassess [this situation] if it wants to make such an proposal.

“However, this assessment will only be significant and carry meaning if a decision is reached involving information-sharing, dialogue and consultation between all the [TRNC] political parties and the President.

Mr Toros stressed it was “essential” such a path is followed so it would be deemed as “acting under international law”.

The Cyprus Conflict has been ongoing since December 1963, when Greek Cypriots seized power in a bloody coup and forced out their Turkish Cypriot partners from government. The island had only been independent of British rule for three years prior to that.

In July 1974, using its Guarantor status Turkey unilaterally intervened in Cyprus to prevent an Athens-backed coup on the island taking hold. The coup was being led by Nicos Sampson, who had threatened to “annihilate” the island’s Turkish Cypriot community.

The island became divided along ethnic lines after the August 1974 ceasefire, with Turkish Cypriots concentrated in North Cyprus and the Greek Cypriots in the South.