UK Covid rules: no quarantine-exemption from Cyprus for those with a TRNC vaccination certificate

Differences for those living in the north and south of Cyprus have come to the fore on multiple occasions during the coronavirus pandemic, and it does so again over the issue of Covid-19 vaccination certificates.

With the United Kingdom choosing to keep Turkey on its high risk Red country list and Cyprus on the moderate Amber, travellers from the Turkish Republic of North Cyprus (TRNC) wishing to visit Britain are forced to fly via airports in South Cyprus to avoid mandatory quarantine when they arrive in the UK.

Each territory – the TRNC, South Cyprus and Britain – has its own Covid-related travel restrictions that passengers must navigate. Making matters even more confusing are the different health rules for England, Scotland, Wales and Northern Ireland – the Covid rules that apply to England may not operate for the other three home nations.

On 19 July, England lifted its 10-day home quarantine restriction for double-vaccinated people returning from Amber-listed countries, such as Cyprus. The change, which affects some 140 countries, has been welcomed by the travel sector and millions of people who can now visit family and friends more easily.

Quarantine-free travel rules back to Britain

The British government regards a person as “fully vaccinated” if they have been administered an approved Covid-19 vaccine, with at least 14 days passing since their second dose.

Like those arriving from Green-list countries, people returning from Amber ones who have received both jabs are now exempt from home quarantine – as long as they have a valid Covid vaccination certificate, and fulfil the other travel and UK border entry criteria.

Before flying back to Britain, travellers are still required to show a negative PCR test result, with the test no older than 72 hours before departure.

UK-bound passengers must also complete the online Passenger Locator Form, and book a Day 2 PCR test of their return, but they are no longer required to do a Day 8 test.

Which Covid-vaccination certificates does the UK accept?

Initially, only those with an NHS certificate were eligible for quarantine-free admission to Britain. However, when the rule changes were first announced at the start of July, the Department for Transport said that work was underway to recognise foreign certification. 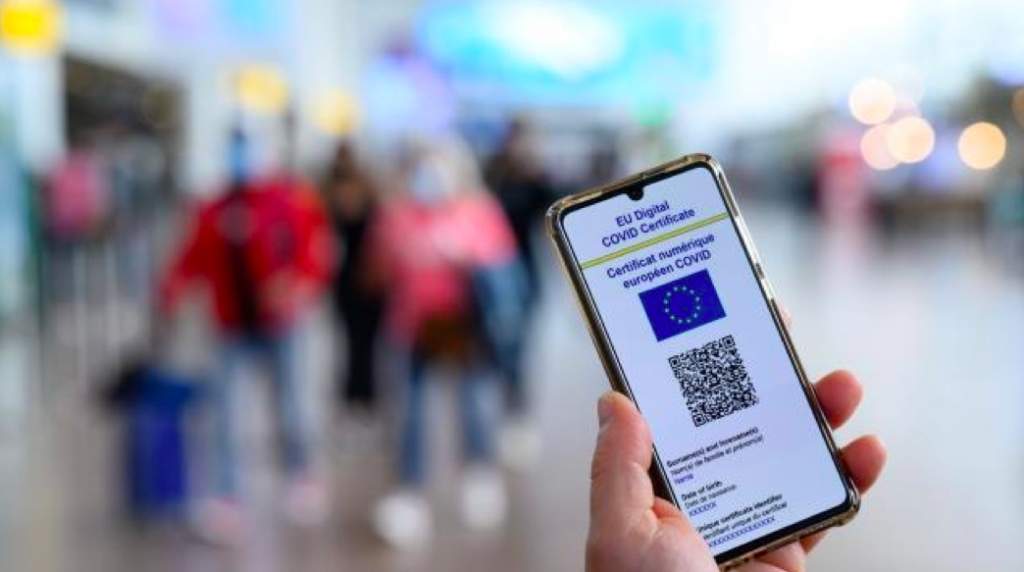 The UK now also accepts the Covid- vaccination certificates from Swissmedic, the US Food and Drug Administration (FDA), and the European Union.

Those vaccinated in Europe should obtain an EU Digital Covid Certificate (EU DCC), which is available in both digital and paper formats, and comes with a QR code.

The certificate is free of charge to obtain from the national health authority of any EU member state. Each one has a dedicated online portal in the country’s official language and also in English.

How to obtain a European vaccination certificate

For most people in the EU, the process for obtaining an EU DCC is straightforward.

In Germany, for example, those armed with the paper version of their Covid-19 vaccination certificate can go online to a website in English and German, where they are asked to download a ‘CovPass app’ to their smart phone.

Described as “easy, paperless, secure”, the app scans the vaccination certificate issued by the German health authority, and uses it to create a digital QR code on their phone.

The QR code allows other authorities, such as airlines and the UK border police, to scan and check the authenticity of the document, as well as learning when and what type of vaccination the person has received and, if they had been diagnosed with the virus, when the person recovered.

Things are not so straightforward for those in North Cyprus. While technically the whole island is in the EU, there seems to be no provisions for those who were inoculated against coronavirus by the Turkish Cypriot health authorities, and who have a valid certificate and QR code from the TRNC government.

Is North Cyprus excluded from the Republic of Cyprus EU certification scheme?

For the island of Cyprus, despite there being two separate administrations, as neither the EU nor the UK recognises the TRNC, currently the only health authority whose Covid-19 vaccination certificates are deemed internationally valid are those issued by the Greek-Cypriot run Republic of Cyprus.

The European Commission’s website on EU DCC includes a link to the Greek Cypriot government website for more information about obtaining an EU DCC in Cyprus. The link goes to the Public Information Office’s coronavirus section,  which has a long list of pdf documents in English with a wealth of information on Covid-19 issues in Cyprus.

If the vaccination certificate wasn’t issued by the Republic of Cyprus, however, the person will not be able to complete the process. They are simply asked to contact the Ministry of Health, which administers the EU DCC portal. 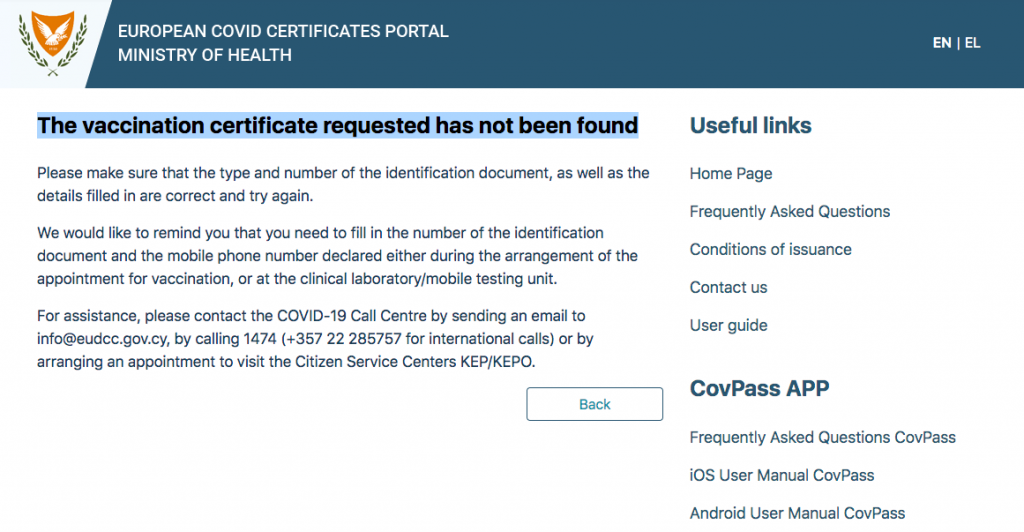 Searching for online information was also futile. On the Frequently Asked Questions (FAQs) CovPass section of the portal, there were nothing related to those who have been inoculated against coronavirus in North Cyprus. It is not clear if people in the TRNC are even eligible to obtain an EU DCC.

The information gap has created problems for some TRNC travellers at the Green Line border, at the South Cyprus airports and when they get back to Britain.

“Hi everyone I just wanted to relay to all members my ANGER and frustration. Today my parents taken the journey to fly back home to UK via the greek side Paphos to London Stansted. At the border they were confronted by the border officers of the fashist and racist greek establishment not only they’ve taken off 4 cartons of cigarets but they were also subjected a €400 fine. These are the greeks that come to our side and stock up shopping and take to the south so basically one law for them and different to Turkish Cypriots and all the others nationalities that are resident there. They arrived at the airport and was forced and made to pay £157 for further pcr test even though they had negative pcr tests from elite hospital 72 hours prior to the flight. We are from Britain with Turkish Cypriot heritage. I urge for all us brits that made Cyprus our home or have a holiday home to reflect the uncalled suffering caused by the south by drafting a letter to all the MPs of your constituency reflecting what’s happening. I will definitely write one on my parents behalf. There is almost 9k of us here so please let’s make some noise to get this to be sorted atleast for us British by Britain. Thanks All.”

Although Mr Ecer’s parents, who live in Enfield, North London, were vaccinated in the TRNC with Pfizer , they were shocked to find out that they had to self-isolate at home in Britain, which he detailed in a second post on the BTCA website on Sunday, 8 August:

“Today, to our surprise once again after 2 days of entering UK we get a shock call from NHS to inform mum and dad that they need to quarantine for 10 days. My parents are both double vaccinated with fizer jab and they done all the pcr’s required Cyprus pass pasinger locator. When we asked why they couldn’t comment but said its more than likely connected with the information provided by the Cypriot Airport to home office. So now chasing home office with no joy. Something very fishy here.”

The experience seems to be borne out by a message from Cyprus Airways customer services. Responding to an enquiry, they say that not only TRNC vaccination cards, but also PCR tests taken in North Cyprus are no longer accepted by Greek Cypriot officials as valid documents for international travel from airports in the South.

Anastasia, a “Contact Centre Agent” for Cyprus Airways, said: “As per the latest Cyprus government decree, passengers with PCR test or vaccines certificate issues from north Cyprus are not eligible to travel.”

The Cypriot Story account on Instagram, which posted the Cyprus Airways exchange, wrote: “Students from North Cyprus are now being punished and restricted from travelling back to school because their PCR and vaccine certificates are not eligible for travel even though the EU and the ROC sent the vaccines to the North. What kind of punishment is this?”

T-VINE has asked the Greek Cypriot authorities to comment on whether these claims are true.

Not everyone travelling from North Cyprus to Britain via the Greek South has had a bad experience. Writing on Sunday, 8 August, Chris Berry said the Greek Cypriot officials were “polite” or “never spoke” but processed his documents and allowed him to proceed with his Jet2 flight to Manchester.

“Travelled back to Manchester via Larnaca last night. No problems encountered at the border, I was asked by the Turkish Cypriot officer for proof of residency, the Greek Cypriot officer was very polite, just checked my PCR test. At passport control at  Larnaca, the officer never spoke, just checked my passport, scanned it and gave it me back. Check in with Jet2.com was extremely busy, it took nearly two hours to check in and get to gate.” 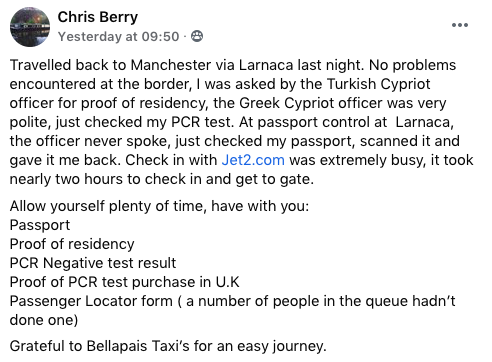 Despite the confusion, TRNC travellers heading to Britain direct from Cyprus can still enter England with their TRNC vaccination cards. However, as this document isn’t currently recognised by the UK government, they still have to comply with full amber requirements, and self-isolate for 10 days and do PCR tests on Days 2 and 8 after they return.

The Test to Release scheme also remains an option applicable for people travelling from amber countries to shorten the quarantine period from ten to five days.

If TRNC travellers choose to travel from Ercan Airport via Turkey to the UK, however, they will be deemed as returning from a high risk country even if they are only transiting through.

As Turkey is on the Red list, regardless of whether a person is fully vaccinated or not, when entering the UK they will be obliged to enter a managed-quarantine hotel for ten days at cost to themselves.

Mandatory quarantine in Britain costs £2,285 for the first adult and a reduced rate of £1,430 for other adults or children over 11 in the group. Child aged between 5 and 11 are charged at £325, while quarantine is free for children aged under five.

More information about quarantining and testing if you’re travelling back from an Amber list country is available from the UK government online.