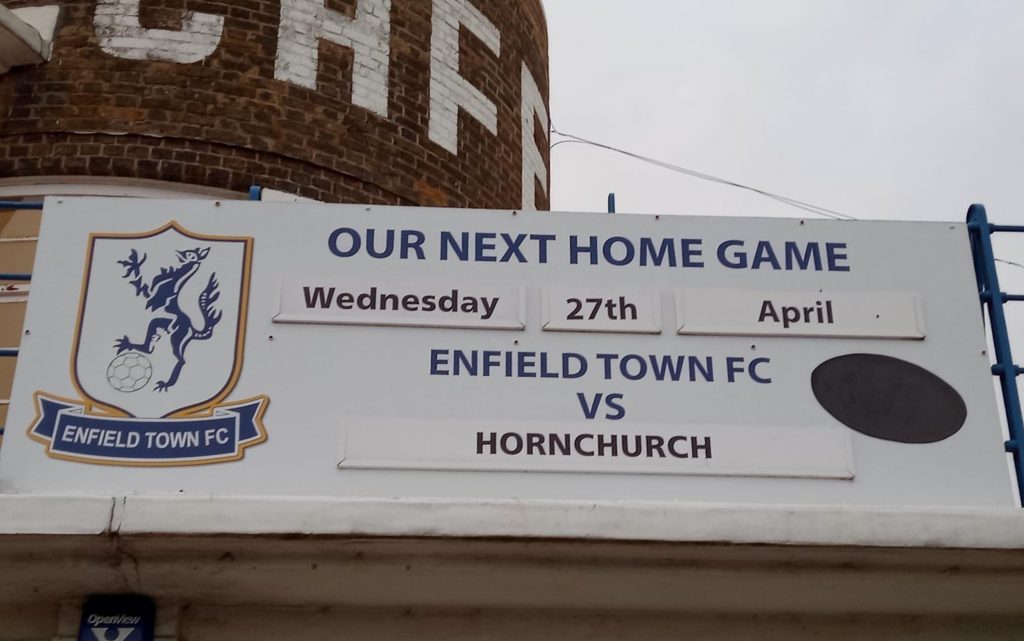 If you live in North London and love football, head down to Donkey Lane, Enfield, on Wednesday night for what is bound to be an epic night of the beautiful game.

Home side Enfield Town Football Club take on their East London rivals Hornchurch in one of two playoff semi-finals in the Isthmian League Premier Division.

Competing against 21 other teams in the division, Enfield Town finished the 2021-22 season in third position with 84 points, securing them a playoff spot with home ground advantage.

The four teams finishing behind Worthing – Bishop’s Stortford, Enfield Town, Hornchurch and Cheshunt – are into the playoffs, aiming to win the remaining promotion spot to the Vanarama National League South Division.

The Isthmian League Premier Division semi-final playoffs are one leg only and, just like a cup game, there must be an outright winner at the end of each match. That means if the game is level at full time, it will go into extra time and, if necessary, penalties.

Both playoff semi-finals take place on Wednesday, 27 April, with the final to be played on Bank Holiday Monday, 2 May.

Many T-VINE readers will be familiar with Enfield Town. Their grounds were used to host North Cyprus’ games during the CONIFA World Cup in 2018, and the playing fields adjacent to the club’s stadium at Donkey Lane is the site of the annual Turkish Cypriot Cultural Festival.

T-VINE talked to Enfield Town director Ramadan Ismail ahead of the club’s big game against Hornchurch to give us the low-down on the fixture.

What time is kick off on Wednesday?

How much are tickets and where can people buy them?

Advanced purchase of tickets to the playoff can be bought online. We are expecting a big turnout so it’s best to buy in advance, as you’ll get through the gates faster. Alternatively, you can pay by cash or card at the turnstiles on the night. Tickets are priced:

Is there car parking at Enfield Town?

Does the ground sell food?

Yes, our fantastic caterers serve up what is recognised as traditional ‘Footy food’: burgers, including vegetarian burgers, and chips.

What is Enfield and Hornchurch’s form going into the playoffs?

Based on the results of the last 6 games for us and Hornchurch, Enfield have a slight edge.

In terms of the results when we’ve played each other this season, both games ended in 2-1 wins for the Towners. However all that goes out the window in these one-off pressure cooker games, which is what the play-off semi-finals are.

For those unfamiliar with Enfield Town, who’s been the standout players for the club this season?

Town Striker Muhammadu Faal is one of our star players, scoring 33 league goals this season. He’ll certainly be looking to add to his tally on Wednesday.

Muhammadu is also a devout Muslim and is currently fasting for Ramadan, so expect a short break during the match, when he will break his fast.

Which Hornchurch players will pose Enfield the greatest threat on Wednesday?

To be honest all of them. They are a solid unit and the current FA Trophy holders – a competition which is the Non-League’s equivalent of the FA Cup.

If I had to pick a couple of their players, it’d be Tom Wraight in midfield and striker Liam Nash.

Any other interesting facts new supporters should know about Enfield Town?

We offer shelter on all sides of the ground, and our Grandstand is one of only two Heritage buildings that is operational on a Match Day in England. The other football ground [with such an asset] is Fulham’s Craven Cottage.

Enfield is the country’s first ever fan-owned senior football club; where we started others have followed!

We have both an indoor upstairs bar and an external takeaway bar/serving hatch. We also have the best walk-in club shop in our league, where you can find everything from club merchandise such as hats, tops and scarves, as well as old football programmes.

For those coming to Wednesday’s game, you’ll need to bring lots of energy and strong singing voices if you choose to stand behind the goal Enfield is attacking. Our fans get very lively when we go on the offensive.