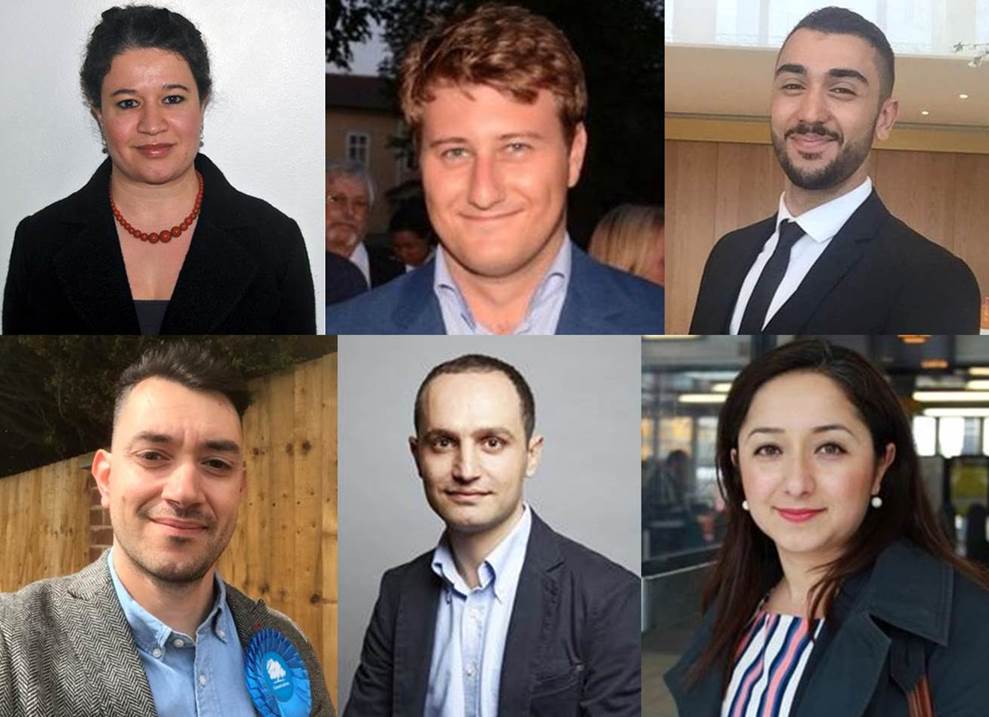 UPDATED 10 May – Kay Isa, a new Conservative councillor in Waltham Forest, had been mistakenly left off the results. now added and total amended.

Last week’s Local Elections 3 May, which took place in London and across England, not only saw a record number of candidates from the British Turkish community stand, but also a record number elected. With 39 councillors winning, it topped 2014’s historic figures of 30 councillors whose roots hail from North Cyprus or Turkey.

A total of sixty three candidates from the community were on the ballot papers for last Thursday’s vote, standing in 18 different boroughs across the capital and one for St Alban’s. Of these, 11 now have councillors of Turkish, Kurdish or Turkish Cypriot heritage.

The Labour Party dominated the community’s results as it did in the rest of the capital, with 33 of the 39 councillors coming from Labour. Just six councillors – or 15% – are Tory. None were elected for the Liberal Democrats or the other smaller parties, including one Turkish origin candidate (Ayse Mary Smith) who stood for UKIP in Bromley.

The candidate polling the highest individual vote was Ergin Erbil, who stood in Edmonton Green, in Enfield, with 2,699 votes. Conservative candidate Gönül Daniels polled 1,891 votes, but it was not enough to gain a seat in Winchmore Hill, although that number of votes would have been sufficient for many other seats in other boroughs.

In Enfield, 29 candidates from the community stood, of which 21 were returned as councillors. One of the borough’s largest ethnic minorities, it means British Turks now hold a third of all seats (21 out of a possible 63), up five from 16 in 2014.

Mother and daughter, and existing  Labour councillors, Alev Cazimoğlu and Nesil Çalışkan (pictured above with MP Keir Starmer, Alev on the far right and Nesil on the far left) both stood in Jubilee Ward, Enfield, and received an identical number votes (2,132), with both duly returned. In neighbouring Waltham Forest, new Conservative councillor Kay Isa, of Turkish Cypriot origin, beat her where husband Nick Halil Halebi by twenty votes with both selected to serve Chingford Green.

The next highest number of British Turkish councillors can be found in Haringey, followed by three in Hackney. There is also at least one councillor from the community in four South London councils – Bexley, Lambeth, Wandsworth and the Royal Borough of Kensington and Chelsea, showing there is life outside of the North London bubble.

Thursday’s results, together with Suzanne Nuri-Nixon’s victory in a by-election in Wymondham earlier this year, bring the total number of councillors from the British Turkish community to 40.

Two of the most notable scalps from last week’s elections were Ertan Hurer, standing in Enfield, and the former St. Albans Mayor Salih Gaygusuz (pictured below). Both were long-standing Conservative councillors, but lost out this time round.

The results of the Turkish-origin candidates in the London Local Elections are given below. Those elected as councillors are indicated with * by their first name:

The Royal Borough of Kensington and Chelsea Council: 1 Councillor