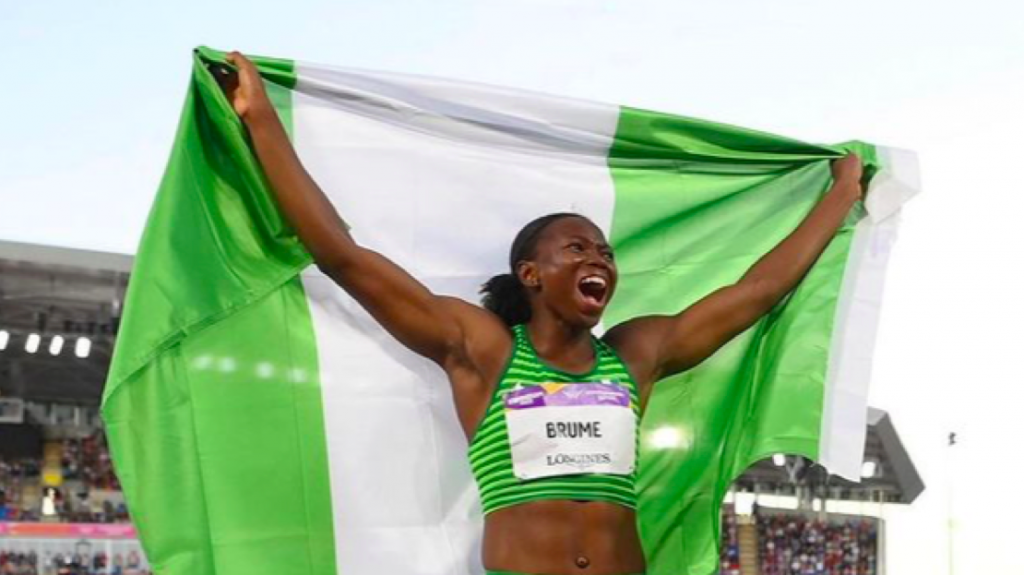 The Nigerian national had already broken the Commonwealth Games record with her second jump, a huge 6.99m. She bettered that with her very last jump of the final, leaping exactly 7 metres to set a new Games record.

The Commonwealth record for Women’s Long Jump had stood since 2006, when Australia’s Bronwyn Thompson had jumped 6.97m at the Melbourne Games.

The current women’s world record is held by Galina Chistyakova of the former Soviet Union, who leapt 7.52m in Leningrad back in 1988. Brume, 26, has a personal best 7.17m.

Brume has had an incredible few months, winning silver at both the indoor and outdoor World Athletics Championships. A former Commonwealth Games champion, having taken gold at the Glasgow Games in 2014, Brume regained her Commonwealth crown in Birmingham to the delight of spectators in the stadium who saw her perform several record-breaking leaps.

Last year, Brume won bronze at the Tokyo Olympics, resulting in widespread celebrations in her native Nigeria and the Turkish Republic of North Cyprus, where she was studying Tourism and Hotel Management.

The athlete graduated with a Masters’ degree from the EMU, North Cyprus, last year. She had moved there in 2016 to study and to develop her sporting career, which was supported with an EMU scholarship.

Ese Brume in action at the Birmingham Games 2022

Brume won the long jump title at Turkiye’s University Games in Pamukkale in 2017, setting a new games record of 6.68m. She not only retained her long jump title at the country’s premier student games, held in Adana the following year, but also added the 200m sprint title in a personal best time of 24.20 seconds, making her a double Turkish student champion.

By 2019, Brume’s talent was there for all the world to see after she won a bronze medal with a jump of 6.91m at the World Championships in Doha. There were delirious scenes when Brume arrived back at Ercan Airport in the TRNC.

The Nigerian’s success shows what is possible for Turkish Cypriot athletes who are currently excluded from major international sporting events due to the non-recognition of the TRNC, and the lack of concerted action by Turkish Cypriot political and sporting officials to end the country’s sporting embargoes.

The only athlete of Turkish Cypriot heritage participating in the Commonwealth Games was Acelya Toprak, who won silver in the women’s judo.