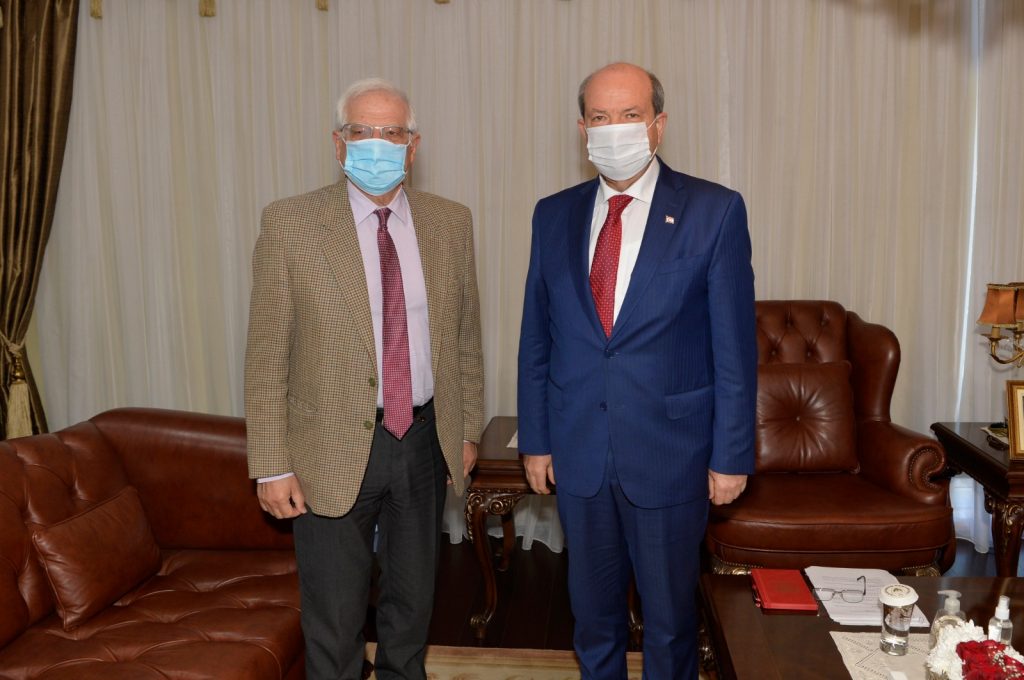 Josep Borrell’s visit to the Turkish Republic of North Cyprus on Friday didn’t generate the results he was hoping for, after the Turkish Cypriot President Ersin Tatar rebuffed his efforts for the European Union to attend as observers at the upcoming Cyprus summit.

President Tatar issued a statement following his 5 March meeting with the EU’s High Representative for Foreign Affairs/Commission Vice-President, explaining why he had declined the request:

“I also informed Mr Borrell that we could not accept their participation in the five-plus-UN informal meeting. Greece and South Cyprus are EU members and it is not realistic to expect the EU to be a neutral party in these meetings.”

Europe’s top diplomat had travelled to the island to meet with the two Cypriot leaders, TRNC President Ersin Tatar and the Republic of Cyprus President Nicos Anastasiades, ahead of the 5+1 informal meeting in Geneva at the end of April.

Alongside the Greek Cypriots and Turkish Cypriots, the three guarantor powers, Turkey, Greece, and the United Kingdom, will also attend the summit, which is being hosted by the United Nations.

President Tatar: “Greece and South Cyprus are EU members and it is not realistic to expect the EU to be a neutral party in these meetings”

UN Secretary General António Guterres had called the informal meeting to allow the two Cypriot sides to explore whether “common ground” exists for a new round of negotiations following the change of leadership in the TRNC last year.

Tatar was elected in October pledging to pursue a 2-state solution in Cyprus. His policy deviates from the internationally accepted framework of a bi-communal, bi-zonal federation, which was established in 1977, but which President Tatar says is “exhausted” after decades of failed talks.

Cyprus was ethnically split in 1964 when Greek Cypriots seized control of the Republic of Cyprus and brought an end to power-sharing with Turkish Cypriots. The division became permanent after a Greece-backed coup on the island in 1974 forced Turkey to intervene as a guarantor power to curb massacres against the island’s Turkish population.

A Population Exchange Agreement in 1975 paved the way for two ethnic territories in Cyprus: a Turkish North and a Greek South.

Good meeting my friend @Christodulides today to review the situation in the eastern Mediterranean. Discussed also #COVID19 and vaccines. Cyprus settlement question is a European Union problem. It impacts regional stability and prosperity.

Met Turkish Cypriot leader @ersinrtatar. Underlined importance of reaching agreement on settlement negotiations & of relaunch of UN process, in accordance with established parameters. EU ready to provide full support to the benefit of all Cypriots.

Despite forty years of negotiations and at least eight different federation proposals in a variety of UN sponsored talks, it has not been possible for the two sides to agree on a permanent settlement to reunify the island.

Greek Cypriots walked out of the last opportunity in Crans Montana, Switzerland, in July 2017, and they also voted against the UN’s Annan Plan to unify the island in 2004.

The EU had assumed it could play a more direct role in the latest Cyprus talks. European Council President Charles Michel told reporters after a video conference with European leaders on 26 February that the EU “will be very committed” to the UN-led talks.

A week later, the message to the EU from the White House in Lefkoşa was somewhat different.

During a frank 2-hour exchange, President Tatar told Borell that the EU was not welcome to attend the Geneva talks due to the bloc’s bias in favour of its Greek Cypriot member.

President Tatar highlighted a number of issues to the High Representative where Turkish Cypriots were being constantly disadvantaged in Europe at the behest of Greek Cypriots.

One example Tatar cited was the process for “the registration of the Geographical Indication of hellimand trading the product through the Green Line Regulation”, which the Turkish Cypriot leader said was being delayed by the Greek Cypriot side “creating problems”.

Hellim, or Cypriot cheese, accounts for 25% of the TRNC’s manufactured output. However, Turkish Cypriots have been prevented from selling their core product to the EU since Cyprus’ admission to the bloc in May 2004 due to Greek Cypriot orchestrated restrictions on TRNC dairy producers.

Another trade problem the Turkish Cypriot President brought up was the shipping of potatoes to Europe. Unlike hellim, farmers in North Cyprus are allowed to sell potatoes to the EU, but only after they have been checked by a certified inspector. “Due to the fact that there is only one person on the inspection list that has been appointed by the European Commission”, President Tatar said, “the technical official is unable to reach the crop sowing season”, which had meant “approximately 2,000 tonnes of potatoes could not be traded”.

The European Commission had promised Turkish Cypriots direct trade back in April 2004, but Greek Cypriots scuppered this as soon as the island became an EU member the following month.

Using their veto, Greek Cypriot authorities forced the EU to first suspend its laws and rules in North Cyprus, essentially depriving Turkish Cypriots the benefits of EU membership. They then got the direct trade directive dropped in favour of a Green Line Regulation that requires all Turkish Cypriot goods intended for sale in Europe to go via South Cyprus first, despite this adding considerable time and costs to buyers and traders.

A more recent issue also affected by Greek Cypriot discrimination is the distribution of Covid-19 vaccines provided by the EU. President Tatar claimed, the North was receiving “only one in 10 of what the Greek Cypriot side has received” from European supplies for Cyprus. The population of North Cyprus is approximately one third of the whole island.

The EU released a statement after Borrell’s Cyprus. It noted that he had met with “President Nicos Anastasiades and Foreign Minister Nikos Christodoulides” to discuss the “latest developments and prospects for progress in the efforts to revive the negotiations on ending the division of the island.”

The statement went on to relegate Ersin Tatar to the status of a community “leader”, making no reference to his democratic 2-state mandate following last year’s Presidential Election. It recorded that Borrell and Tatar had met “to discuss the Cyprus issue and related EU measures to promote the economic development of the Turkish Cypriot community and bring the Turkish Cypriot and Greek Cypriot communities closer together.”

“I met the two Cypriot leaders and come out of the talks believing that while the road ahead will not be easy, solutions can be found. I encouraged them to seize the opportunity of the 5+1 informal meeting in Geneva next month and come to the talks prepared to compromise. The European Union fully supports the resumption of the Cyprus settlement process under UN auspices, as soon as possible,” the High Representative was quoted.

Borrell recalled that this process was not starting from scratch: “There is a framework, including UN Security Council resolutions, with convergences to build on, with the support of the UN, the Guarantor Powers and the European Union. It will not be an easy process but it can be done, for the benefit of all Cypriots, for Europe, and for regional stability,” Josep Borrell explained.

During his visit to Cyprus, High Representative Borrell also held meetings with Special Representative of the UN Secretary-General Elisabeth Spehar and with Colonel Neil Wright, who heads UNFICYP – the UN’s peacekeeping forces in Cyprus.