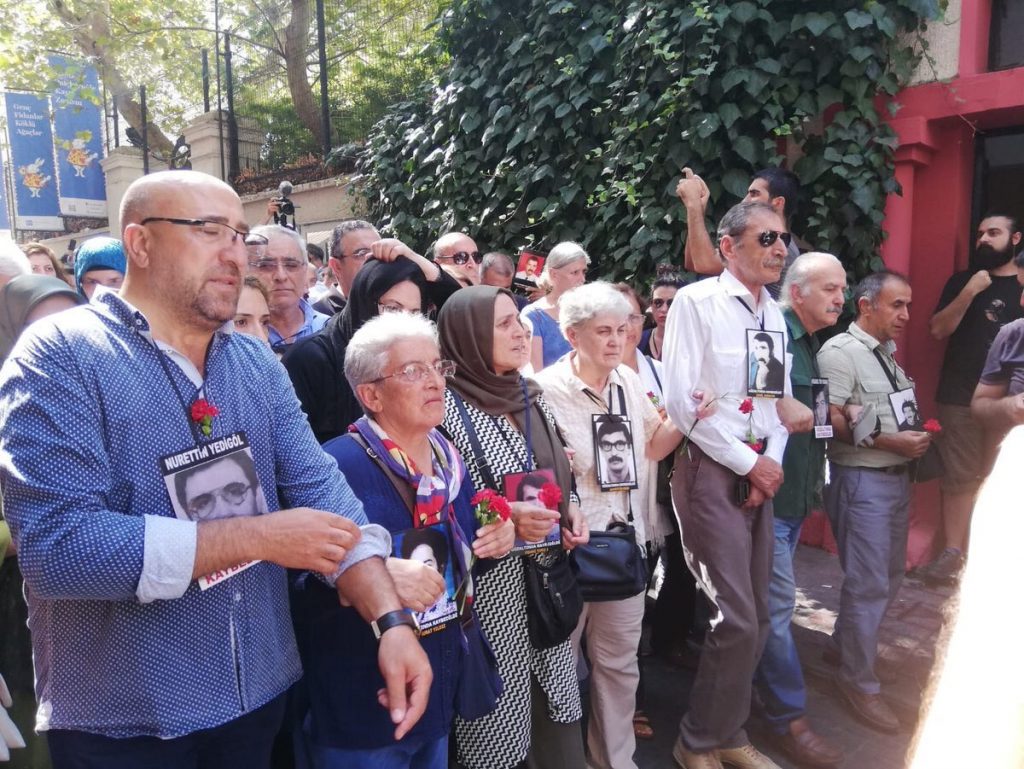 For the second week running, mothers seeking to peacefully demonstrate and demand information about their missing children were denied the right to hold their vigil on İstiklal Caddesi in Istanbul.

The government ban on their assembly remained in place and in a bid to prevent violent scenes of last Saturday, police erected barriers in surrounding streets to deny the mothers, their relatives and hundreds of supporters access to Galatasaray Square, situated in the middle of the popular, pedestrianised shopping avenue and where the vigil has been taking place for over twenty years.

Standing outside the offices of the Human Rights Association, representatives of Saturday Mothers read out a statement, reiterating their constitutional right to peaceful assembly and protest. The group then peacefully dispersed.

The group, known as Saturday Mothers, have been holding weekly vigils at the same spot since 1995 demanding to know the fate of their children, who disappeared and are feared murdered by the Turkish deep state.

Their peaceful gatherings in Galatasaray Square involve holding photos of their missing children in silence.

Occasionally some will recite words to remember their loved ones and to highlight the families’ long suffering, as successive Turkish governments have steadfastly refused to open up archives, which could reveal the fate of the estimated 800 persons thought to have died in state custody, nor will the authorities help locate their bodies or bring the perpetrators to justice.

Ten days ago, the Turkish authorities announced that the vigil had been ‘hijacked by terror groups and their sympathisers’, making permission for them to assemble in the heart of the city unthinkable. The families strongly deny these claims.

#Turkey gov so scared of its own people it stops #SaturdayMothers pic.twitter.com/R0DKK2bj4r

The government’s efforts to stop the weekly vigil has been roundly condemned by Turkey’s opposition parties CHP (Republican People’s Party) and HDP (Peoples’ Democrat Party), rights groups and politicians abroad. On Thursday, Daniel Holtgen, director of communications at the Council of Europe posted on Twitter:

“#Turkey: We are observing the situation closely after the ban of the ‘Saturday Mothers’ demonstration. Freedom of assembly is a key pillar of democracy. All Council of Europe member states have a duty to protect these rights under #ECHR @coe.”

Yesterday’s attempted vigil by Saturday Mothers marked their 701st week of peaceful protest. The families have vowed to fight on.

#Turkey: We are observing the situation closely after the ban of the ‘Saturday Mothers’ demonstration. Freedom of assembly is a key pillar of democracy. All Council of Europe member states have a duty to protect these rights under the #ECHR @coe.https://t.co/PmRuZQ1GXQ