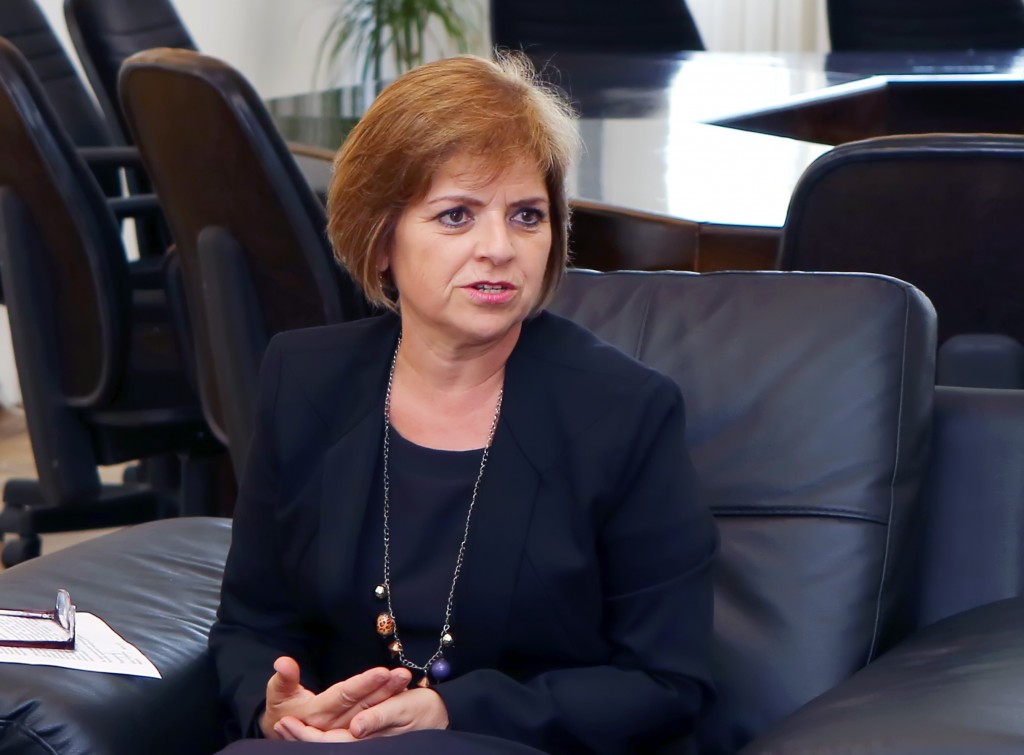 Born in Lefkoşa in 1958, Emine Çolak was forced to flee with her family at gunpoint when Greek Cypriots took over the running of the island by force in December 1963. Moving to London at a young age, she studied law at SOAS University and became a barrister in 1980. She returned to Cyprus to set up her own law firm, quickly making a name for herself in Human Rights cases.

In 2005, she founded the Turkish Cypriot Human Rights Association and remained its chair until earlier this year. She helped establish the TRNC’s internationally recognised Immovable Property Commission, which deals with the property claims of Greek Cypriot refugees, playing a pivotal role in how the thorny issue of refugee property rights are addressed. She has also supported NGOs working with children, women, the LGBT community, patients and refugees.

A long-standing active member and progressive voice of the Republican Turkish Party (CTP), Çolak served as a councillor on the Nicosia Turkish Municipality for eight years (1994-2002), and coordinated the Law Commission in preparation for the Annan Plan for Cyprus during 2003 and 2004. Since 1990, the mother-of-three has been active in bi-communal work, participating in the ground-breaking Turkish-Greek Forum in 2002.

In 2007, President Mehmet Ali Talat appointed her to the High Judiciary Council and earlier this year, when he returned as head of CTP, he invited Çolak to become the TRNC’s first female Minister of Foreign Affairs.

With the Cyprus talks in full swing, her schedule has been relentless. We caught up with Ms Çolak in between her overseas visits to ask about the raft of foreign affairs issues she is currently tackling.

Were you expecting the appointment and how did you feel when asked?

I had been offered various political posts before and not been motivated to accept. After so many rejections, I was surprised to be considered for this position. However, especially in view of the new and positive developments in the negotiations, I was both honoured and keen to accept as it has always been important to me to contribute in any way I can to a final solution in Cyprus, and this seemed like a way in which I could do that.

What are your priority issues as TRNC Foreign Minister?

To support and protect the ongoing negotiation process. Staff from the TRNC Foreign ministry are involved in the various tasks of the talks, including the direct negotiations at the table, note-taking, translating, heading working groups and technical committees.

Another priority is to establish dialogue both with foreign missions on the island and also to go abroad to convey the developments relating to the negotiations and the stance of the Turkish Cypriot side. We have a need to put the Turkish Cypriots on the map to combat the aggressive campaign against us of many, many years by the Greek Cypriot side to prevent us from having any contacts with international players.

The knowledge gaps about Turkish Cypriots have been filled with endless negative images of us as an underdeveloped society under “military occupation” with no sense of independence or democracy, and totally un-empowered. We may have many difficulties through non-recognition, but I think there is much to be said for our efforts to build a state with democratic structures and rule of law – it is far from perfect – but then again, which society is?!

Is it easy to develop a coherent foreign policy when one half of the TRNC coalition government (CTP) is committed to a reunified Cyprus, whereas the UBP is keen to promote the existence of the TRNC?

The Joint Statement of Mr. Anastasiades and [former UBP leader] Dr. Eroğlu, the leaders of the two communities, on February 2014 is the guiding document, not just for the ongoing negotiations, but also for the coalition partners. You are right about a traditional major difference in the policy of each party relating to reunification. But after the election [as TRNC President] of Dr. Eroğlu, he declared his readiness to continue negotiations, to build on the convergences reached during the term of Mehmet Ali Talat, which form part of the joint declaration. The Joint Statement of the two leaders has been reconfirmed as an accepted basis by the coalition government. The government programme, approved by Parliament on 25th August 2015, includes support for the negotiations conducted by President Akıncı within the parameters of that declaration. In this respect there is at present a basic consensus on the negotiation process, which has not suffered any damage as yet.

As in 2004, it seems the bulk of TRNC political energy is on the negotiations. Is there a danger the Turkish Cypriot side puts all its eggs in one basket, when there should be at least equal focus on the day-to-day running of the TRNC, including deepening and expanding relations with key states abroad?

For the Turkish Cypriots there is no “putting all eggs in one basket” because both sides have agreed that nothing is agreed till everything is agreed. That means that its business as usual for the government – and that business, based on the government programme, includes an ambitious target for reforms and EU harmonisation. These are measures that we need whether there is a solution in the coming months or not. As regards relations with key states abroad, if anything the current intensified negotiation process is pushing us to be even more pro-active in these contacts in order to secure support and encouragement, as well as awareness of the need for international contribution to the financing of a potential settlement.

How would you describe relations with the EU right now?

It is still a constant battle to receive the treatment we deserve because the Greek Cypriots, as the Republic of Cyprus, are within the EU and all of its structures and decision-making bodies. They aggressively oppose any measures or contact that they regard as even implied recognition of the TRNC. This is often over-exaggerated to the point that it becomes not just unfair, but downright offensive and disrespectful of the integrity of the Turkish Cypriots. When incidents of this kind occur, we make our protests and objections known, and emphasise how counterproductive this is at a time when the Turkish Cypriots need to be assisted, encouraged and motivated to make preparations for EU membership. 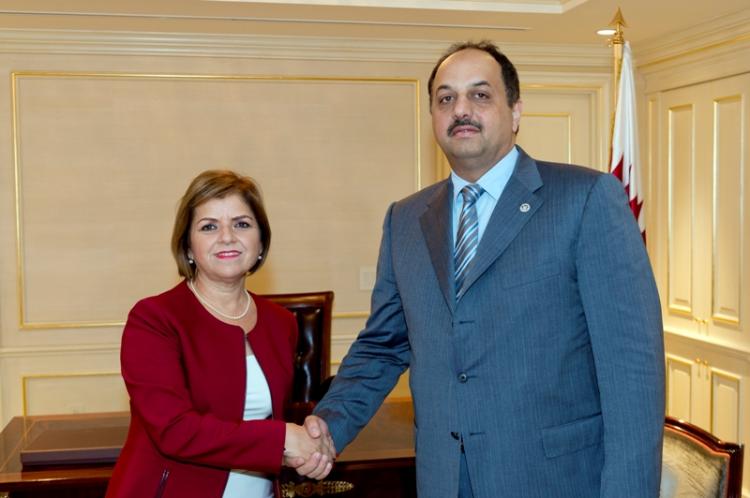 How are TRNC relations with the Turkic republics and member states of the Organisation of Islamic Co-operation (OIC)?

The TRNC has continued its efforts to be involved in the OIC, as well as the Economic Co-operation Organisation [for West & Central Asian states] and is an observer member of both. The TRNC delegation participates in the meetings and has also hosted events in Northern Cyprus on certain issues.

Many in the UK complain about the lack of clear and regular communications that articulate the Turkish Cypriot position. What is your ministry doing to address that?

We are working with experts to try to address this problem. Contacts with key personalities in politics and media are a part of the pro-active campaign, which has already started. I will be visiting London shortly in this context, as well as other EU member country capitals, as well as Brussels.

There is a campaign among the Turkish Cypriot Diaspora to ensure TRNC citizens living abroad can participate in future elections, and indeed vote in the anticipated referendum on Cyprus’ future. What are your government’s views on this?

This has not been a specific issue on the government’s agenda. But the discussions have recently been revived by the Diaspora and a conference organised to discuss this issue followed by a report. This has been presented to us and will be looked at in detail in the coming months. As a Turkish Cypriot who has lived abroad, I empathise with the need felt by that community to have a say in the political sphere of the TRNC. I am also aware that this must be thought through and handled carefully so that it is balanced against the legal and political rules relating to democratic rights in general, which are largely, though not exclusively, based on residency.

Following the EU-brokered deal on the hellim PDO issue, many Turkish Cypriot concerns remain, especially that South Cyprus retains too much control over the PDO. What is your government’s view on this?

This is an ongoing process in which a compromise has been reached. Interestingly, the formula agreed is not the ideal one in the eyes of either side, but just one that gives the parties a basis on which to proceed. There is still much groundwork to be done in the TRNC for the production of hellim to reach the standard required, and the matter will be dealt with step-by-step, and any complications handled as they arise.

With the Rio Olympic Games on the horizon, what is your government doing to ensure TRNC citizens can compete?

I am not aware of any efforts this year beyond what is exerted every year to get an opening in such international competitions.

Do you feel the land ownership rights of Evkaf need to be properly examined before any final government position is taken on Maraş?

Evkaf is an issue on which there is much research and proposals formulated. Both the facts and the legalities are extremely complex, but I am convinced that they will be handled appropriately within the negotiation process in due course.