Turkish Cypriots in the UK and abroad have condemned the Met police’s decision to apologise to a London-based Greek Cypriot lobby group after officers displayed the flag of the Turkish Republic of Northern Cyprus (TRNC) at a festival last year.

Groups representing the community have lambasted Metropolitan Police Service chiefs after it emerged that they had caved in to demands for an apology from the National Federation of [Greek] Cypriots in the United Kingdom (NFCUK), as previously reported by T-VINE.

The Met police said sorry to the NFCUK following an investigation, despite a spokeswoman admitting that the TRNC flag is “not prohibited or illegal” and that members of the Turkish Police Association (TPA) who had displayed it during the 2018 Turkish Cypriot Cultural Festival in Enfield, north London, “were not found to be acting in any intentional discriminatory way”.

She had said that a “recommendation” had been made that “only MPS-approved literature/property is displayed on a stand attended by police” to prevent the “risk” of such an incident being repeated.

Writing to Met Police Commissioner Cressida Dick, Ersu Ekrem, head of the British Turkish Cypriot Association (BTCA), accused the force of “blatant” double standards, pointing out that MPS GCA members had displayed the flags of Greece and the Greek Cypriot-run Republic of Cyprus – which form part of their logo – at their stand at a recent wine festival in London.

In addition, full size flags were prominently displayed alongside the Union Jack and the Met Police flag at the MPS GCA’s annual general meeting in April, held at the Greek Cypriot High Commission in London and attended by Met Police commander Mark McEwan, images of which were shared on the organisation’s Twitter account, @MPS_GCA.

And in July 2016 British police officers of Greek and Greek Cypriot origin provided support for a “Turkey hands off Cyprus” protest in the capital, reporting in a politically loaded press release published on their website, along with photos from the march, that “British Cypriots gathered outside Turkey’s embassy calling for the end of the occupation of Cyprus so the island could be united once again”.

In the BTCA letter, seen by T-VINE, Mr Ekrem said: “We understand the TPA were informed that the Met now operates a blanket ban on use of flags by its officers attending community events.

“Yet for this year’s (Greek) Cypriot Wine Festival, held a few weeks ago, officers of Greek Cypriot heritage used Greek and Republic of Cyprus (RoC) flags to promote their presence at this event and on their stand.

“Why was this permitted and is this not a blatant double standard?”

Mr Ekrem called on Commissioner Dick to apologise to the TPA and British Turkish Cypriots “for this discrimination” and for the “deep upset caused to our community”.

His letter added: “As you know, members of the TPA attended the Turkish Cypriot Cultural Festival in a voluntary capacity, using their own time to represent the Met and to build bridges with the community, which is vital both for recruitment, and also trust and confidence, especially in the wake of knife crime.

“What message do you give to these officers and the community when Turkish Cypriot origin police are reprimanded for sharing their ethnic identity at an event for and by Turkish Cypriots?”

Leyla Kemal, president of the UK’s Council of Turkish Cypriot Associations, said the Met’s apology to NFCUK had caused “outrage and sadness” among the Turkish Cypriot community.

Mehmet Hüseyin, of the Association of Turkish Cypriots Abroad, said: “The Greek Cypriots are doing everything in their power to stop us Turkish Cypriots from expressing ourselves, even at cultural events.”

Met Police tells T-VINE: “We will not be discussing this [Greek Cypriot complaint] further. Anyone who wishes to make a complaint about the actions of Metropolitan Police officers or staff can do so – this will then be assessed & acted on accordingly”

T-VINE’s report of the Met’s apology also sparked a storm of protest on social media.

Facebook user Esen Heath described the move as “absolutely pathetic”, pointing out that the TRNC flag had been shown at a Turkish Cypriot festival “not a Greek Cypriot” one, and that the police present were “obviously encouraging Turkish Cypriots to join the force”.

Others called on the police to apologise to the Turkish Cypriot community.

BTCA accuses Met of “a blatant double standard” after banning Turkish flags, while allowing Greek officers to fly theirs

Although no official statement was issued about the content of the meeting, T-VINE understands the Met’s flag apology was among the topics the pair discussed.

Enfield Council leader Nesil Çalışkan, who is of Turkish Cypriot heritage, did not comment directly on the Met’s TRNC flag apology when asked for a response from T-VINE, but stressed the importance of the police and other public sector workers being able to build strong community relations.

“Enfield, indeed London, has a large and significant community of Turkish Cypriots who have been in the city for decades,” she said.

“It is a community that is incredibly proud of its identity and culture. The diversity of the borough is also enriched by a large Greek Cypriot community. 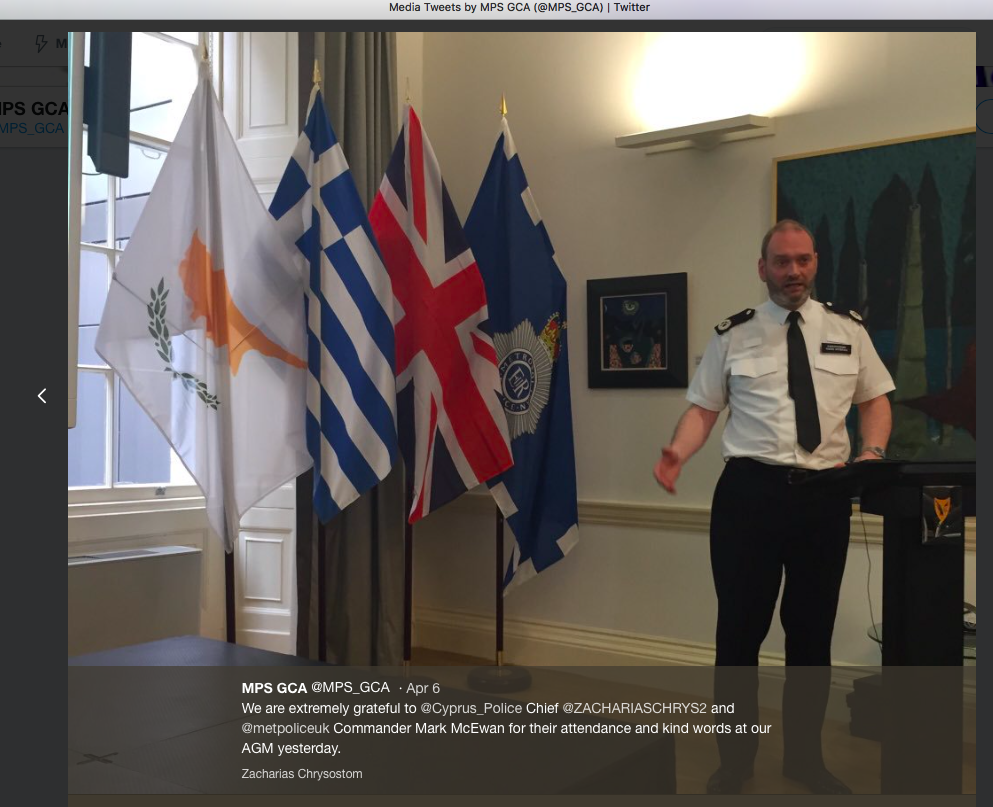 “All cultural festivals are an opportunity for our public services like the Police, NHS and the Council to reach out to different groups of residents about the work they do to serve the public. Festivals are also about bringing people together and celebrating our diversity.

“It is crucial that we all support our hard-working public sector workers to build good community relationships and cohesion.”

Asked to comment on the points raised in the BTCA letter, a Met spokesman said:

“In June 2018 a complaint was received after a flag was displayed on a Metropolitan Police stand at the Turkish Cypriot Festival in Enfield.

“This complaint was addressed through the appropriate channels – we will not be discussing this, or details of subsequent correspondence, further.

“Anyone who wishes to make a complaint about the actions of Metropolitan Police officers or staff can do so – this will then be assessed and acted on accordingly.”