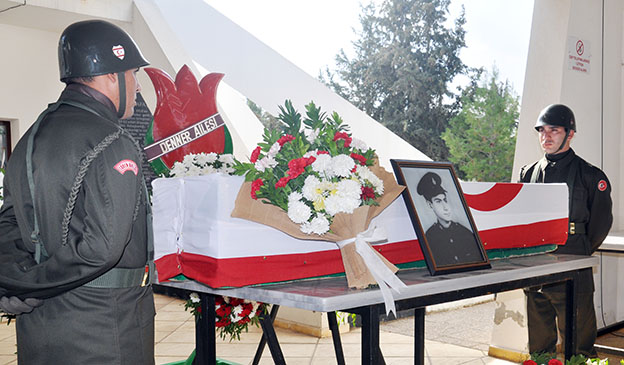 A Turkish Cypriot police officer has been laid to rest 52 years after his murder. Hasan Nural Cevdet Ezel was buried in Lefkoşa with full military honours on 27 November, in the presence of his family and friends.

Officer Ezel had been on duty at Koççinodrimitya Police Station, located just outside of the capital, when he was abducted in December 1963 by EOKA forces. The 25-year-old was never seen again.

Years later, following an appeal by writer Sevgül Uludağ, who has been instrumental in helping to piece together information about Cypriots missing during the conflict, a Greek Cypriot came forward to give details about Hasan Ezel’s fate. According to his testimony, on 28 December officer Ezel and three fellow Turkish Cypriot police officers were abducted and taken to a hill a few kilometres away from Koççinodrimitya Village. All four were shot and dumped in a well.

This and similar events that took place during a ten-day period dubbed ‘Bloody Christmas’ in 1963 was part of a brutal coup by Greek Cypriots. They seized power by killing dozens of Turkish Cypriots, while forcing thousands more from their homes in a climate of fear that would last for 11 years until Turkey’s intervention in July 1974.

“His only crime was to be a Turk”

There were a total of 18 wells on the hill and the vital information helped the UN Missing Persons Committee to locate the remains of Hasan Ezel and return them to his family.

His nephew, businessman and Olay newspaper owner Nural Ezel, travelled to Cyprus to attend the funeral, which was led by his aunts, Hasan Ezel’s sisters Meral Tektan and Sevim Tanaydın.

The sisters told media about how hard their brother’s disappearance had been on the family, especially for their mother who prayed daily for news about her missing son. Sevim Tanaydın said she died of a broken heart 18 years ago having never discovered his fate, as did his two brothers.

She added, “Our pain, our anger is huge. We should not trust Greek Cypriots. If they can kill an innocent person like my brother, they can do anything. His only crime was to be a Turk.”

Named after his uncle, Nural Ezel, also spoke of his anguish: “I have carried my uncle’s name for 52 years. I never got to see him. I am proud to be named after him. I have tried to be worthy of this. I am glad he finally has a proper grave, but it is a bitter sweet moment for me. There should never be a repeat of this. Let there be no more wars.”

On 11 December, Özel Reşat Kansoy, a teacher and writer who had also been abducted and murdered by EOKA over 50 years ago, was buried with full military honours in Lefkoşa. Among those attending his funeral was TRNC President Mustafa Akıncı.

Born and raised in a village just outside of Limasol, Kansoy was aged 31 when he and a friend, Bayar Piskobulu, disappeared, along with their van driver Erol İsmail, on 18 April 1964. Their remains were found earlier this year in the Maşera Forest.

Kansoy was an occasional contributor to Halkın Sesi newspaper, which reported the three Turkish Cypriots as missing in an article on 21 April 1964. It stated that they had set off at 4.30pm in the afternoon. According to friends, their last known sighting was on the outskirts of Lefkoşa.

Well-known and well-liked, the inspirational Kansoy had married a fellow teacher, Ülker, in 1960 and became a father to a baby girl, İnanç, six months prior to his disappearance. While the family had long since accepted that he had been murdered, the discovery of his remains brought to the fore the pain of his loss by a wife in the prime of her life and a daughter who was deprived of the love and support of a father.

The TRNC President, also from Limasol, and his wife Meral, along with many other notables joined Özel Reşat Kansoy’s relatives and family friends to mourn his loss at the funeral last Friday.

The remains of both Özel Reşat Kansoy and Hasan Nural Cevdet Ezel were discovered by the Committee on Missing Persons in Cyprus (CMP).  This bi-communal body was established in 1981 by the leaders of the Greek Cypriot and Turkish Cypriot communities with the participation and support of the United Nations. A total of 1,508 Greek Cypriots and 493 Turkish Cypriots were reported missing during the Cyprus Conflict that occurred between 1963 and 1974. The CMP’s objective is to recover, identify, and return to their families the remains of these 2001 missing persons.

To date, the CMP has returned the remains of 618 people to their relatives, 148 of them Turkish Cypriot. A further 1,017 bodies have been found on excavated sites and exhumed, and now await identification.

Some 20 million Euros have been donated by the EU, the Greek and Turkish Cypriot authorities, and many countries around the world to assist the work of the CMP. Approximately half the money has been used for excavation and exhumations, a third on genetic identification, with the remainder on anthropological analysis.

The group’s work was captured in a short documentary, Digging for a Future, in 2010, which was made with the support of the EU. You can watch the 20-minute clip here.