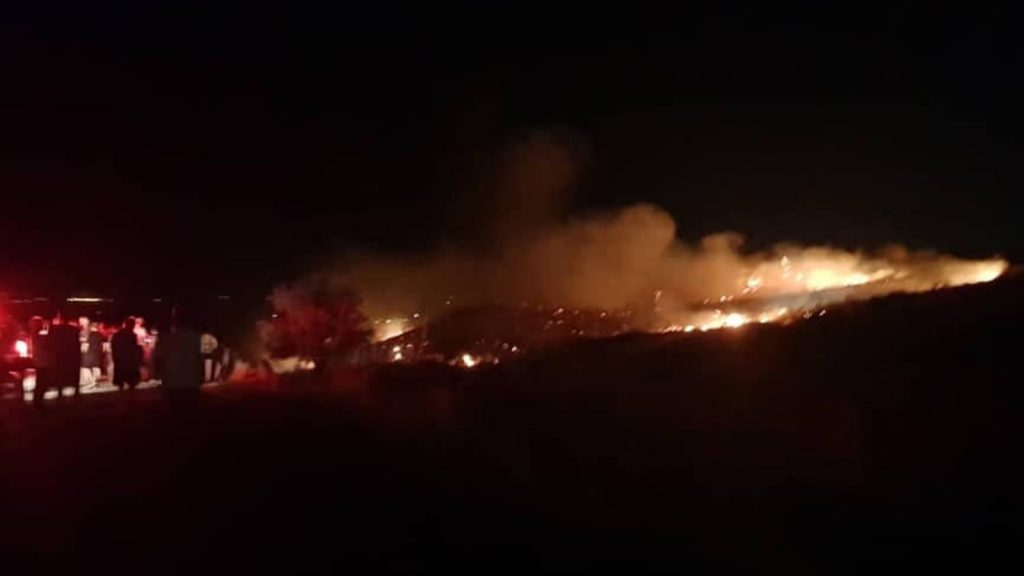 The British government is not making changes to its travel advice for Cyprus “at this stage” after a suspected surface-to-air missile blew up over the Turkish Republic of Northern Cyprus (TRNC), a spokesperson has told T-VINE.

“We continue to work locally to verify the circumstances surrounding the recent incident,” a spokesperson for the Foreign and Commonwealth Office (FCO) in London said.

The guidance for UK citizens planning a trip to the island – last updated on 5 April and still current at the time of writing – makes no mention of the incident, which occurred when a projectile, believed to be a Russian-made S-200 anti-aircraft missile, exploded in mid-air in the early hours of Monday, 1 July, scattering debris over a wide area, but luckily without casualties.

The largest parts of the object fell near the village of Taşkent on the south-facing slopes of the Five Fingers mountain range, sparking a bush fire.

The noise of the blast was heard for miles around, initially leading to fears that a plane or helicopter had crashed.

No air raid sirens or other warnings were sounded, raising questions as to how a missile could have reached the island apparently undetected.

Those first to the crash site were seen handling pieces of wreckage without any protective clothing or equipment, seemingly unaware of the risk from potentially toxic fuel or of further explosions.

A team of experts from Turkey’s Disaster and Emergency Management Authority – dressed in full-body “hazmat” suits and face masks – later declared the area free of any traces of biological, radioactive or chemical materials after taking measurements.

TRNC Deputy PM Kudret Özersay: “Our initial findings confirm that this is an S-200 missile”

TRNC Deputy Prime Minister and Minister of Foreign Affairs Kudret Özersay, who was one of the first to arrive on the scene, said that initial investigations pointed to an S-200 missile that had “gone off course” after being fired from Syria in response to Israeli air strikes.

“A similar missile had fallen in Gaziantep [in Turkey] in 2018,” he said. “The writing on that missile and on the object that crashed in the TRNC is the same.

“Our initial findings confirm that this is an S-200 missile. This is an important incident but there is no need to panic.”

Prof Özersay said that he had also been in contact with foreign diplomats based in South Cyprus from countries that could have information about the incident.

The FCO spokesperson, when asked if any officials from the British High Commission in Cyprus or the British Sovereign Base Areas (SBAs) had discussed the matter with Prof Özersay and the TRNC authorities, simply said that the UK “enjoys excellent bilateral relations with the Republic of Cyprus, including in the fields of defence and security”.

The FCO – citing “operational reasons” – refused to comment on whether or not the suspected missile had been detected by radar located in the SBAs or if it had passed through SBA airspace.

Figures on both sides of the island sought to play down the explosion as a one-off, mindful of the effect international media coverage could have on the image of the island as a safe tourist destination – as illustrated by a report in The Sun newspaper that described the missile scare as a “terrifying new development for the million plus Brits who travel to Cyprus every year”.

TRNC Prime Minister Ersin Tatar, flanked by military commanders, sought to reassure members of the public at a press conference following an emergency Cabinet meeting, and called on people not to “exaggerate” the issue or spread false information.

“We have been assured by our military authorities that the missile does not pose a health threat,” he said.

“This was an accident and a mistake. It could happen as a coincidence.”

On Tuesday Greek Cypriot Defence Minister Savvas Angelides said during a visit to Larnaca that there was no cause for alarm.

“The war in Syria has been going on for years without us facing any incidents,” he was quoted as saying by Greek Cypriot media.

“This is an isolated incident and must not lead to the conclusion that Cyprus is in a war zone.”

Meanwhile a Greek Cypriot official was accused of becoming the “conscience police” after he suggested that the Cyprus Mail newspaper could face criminal proceedings for using the “illegal” Turkish Cypriot name of Taşkent in its reporting of the explosion.

The South’s auditor-general Odysseas Michaelides claimed on Twitter that the media outlet’s use of the name Taşkent for the village known to the Greek Cypriots as Vouno, via a report by the news agency Reuters, could be investigated under a 2013 law which “prohibits the use of place names that are not recognised by the Republic of Cyprus”.