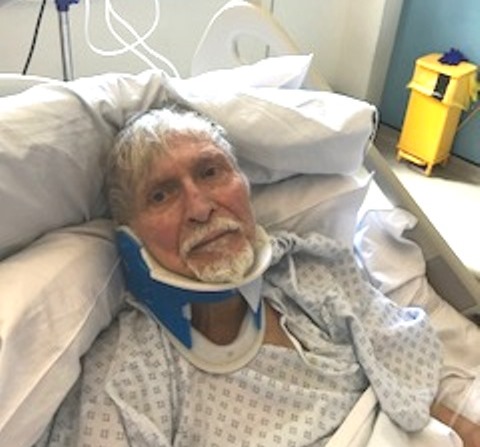 Police in Newham are appealing for information and witnesses after an 82-year-old vulnerable man was violently robbed. Ahmet Dobran, who is currently battling cancer and uses a walking stick, was dragged to the ground by three men who pinned him down before forcibly removing his personal jewellery.

The attack took place in Sussex Road, E6, at about 7pm on Sunday, 27 August. The elderly victim sustained three fractures to his spine after one of the three men grabbed him by the neck whilst the others reigned blows to his back and arms. They then forced him to the ground, where they removed his gold bracelet and Longine wristwatch.

The octogenarian, who is originally from Cyprus, has given permission to detectives to release an image of him in hospital where he remains undergoing serious treatment. The attack has aggravated other conditions, such as Parkinson’s, and a cancer Ahmet was currently having treated.

Images of three men wanted for questioning in connection with the incident have also been released by detectives and the public are being urged to help identify them.

PC Sam Bush, the investigating officer, said: “How three grown men can be so vicious in attacking and robbing an 82-year-old man with a walking stick is beyond comprehension. He was out shopping at the time of the attack and had bags of shopping in his hands, which made him even more vulnerable.”

“The callous men who attacked Ahmet swore at him throughout the attack. He is understandably in a state of shock and in a serious but stable condition in hospital. We need to catch these callous thugs before they target anyone else as they clearly have utter disregard for their victims and do not hesitate to use violence.”

Anyone who recognises the men pictured is urged to call police on 101 or Crimestoppers anonymously via 0800 555 111. You can also Tweet information to police @MetCC.