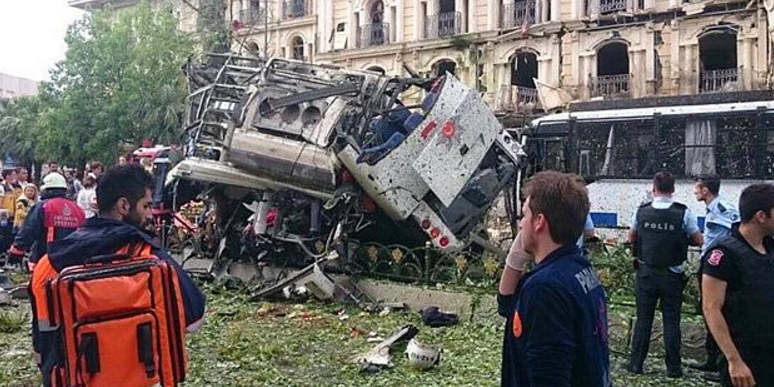 A car bomb targeting a police bus has killed seven offers and four civilians, while injuring scores more. The explosion occurred in central Istanbul at rush hour this morning.

At 8.35am, a bomb was detonated by a police station in Vezneciler, located in the city’s historic Fatih district, just as a bus carrying a riot police unit was driving by. 11 people were killed and 36 wounded, three of them critically.

Visiting some of the wounded in hospital, President Recep Tayyip Erdoğan said: “These (attacks) are being carried out against people whose duty it is to ensure the security of our people.”

“These cannot be pardoned or forgiven. We shall continue our fight against terrorists tirelessly until the end.”

Foreign Minister Mevlüt Çavuşoğlu also condemned the cowardly attack, stating the attackers were “cold-hearted” for exploding bombs during the holy Muslim month of Ramazan, which is in its second day.

Today’s bomb attack is the third to hit Istanbul this year. In January, a suicide bomber struck in Sultanahmet killing 13, and in March five people died in another suicide bombing, this time on İstiklal Caddesi.

Turkey has been under attack from two separate terrorist groups, Daesh and PKK, since last summer, resulting in the deaths of hundreds of police officers, soldiers, and civilians.