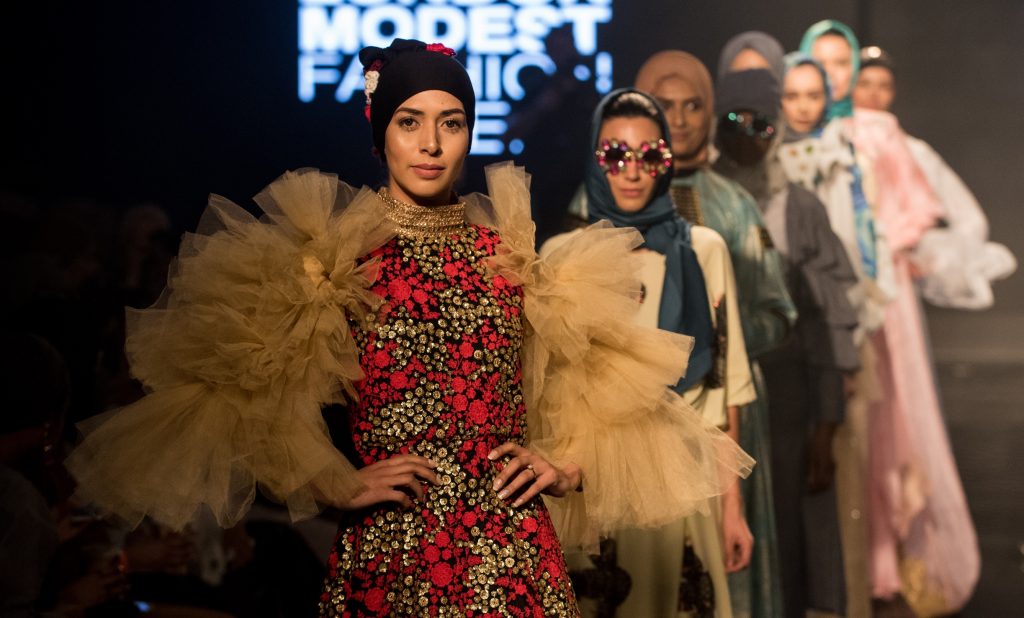 Last month, the leading names and brands in the world of modest fashion came together to showcase their new lines during Modanisa London Modest Fashion Week, held in Olympia, West London, as part of the Muslim Lifestyle Show.

Under the banner “embrace the grace”, 26 designers presented their collections on the catwalk. Among them were Turkey’s Refka, Mayovera, and Selma Sarı, British labels Pillar, Saiqa Majeed, and Farrah Naaz, the USA’s Fllumae, Malaysia’s Nourish Kareem and Aidijuma, and Helena Latifi of Norway.

The catwalk shows had sold out weeks ago. Each one was about 30-minutes long and featured multiple designers; those attending were not left disappointed. The glitz and glamour of the Modanisa-sponsored catwalks were on a par with those staged by the more mainstream London Fashion Week. Professional models were dressed, styled and sent down the runway, watched by a mainly female audience of all ages, some conservatively dressed, others less so, but all equally enthralled by the gorgeous spectacle on display.

Opening the event was Halima Aden (pictured below) – the world’s first hijab-wearing model – who stepped on to the runway wearing a peach blush abiye (evening dress) and hijab by Minel Aşk (Turkey). The Somali-American recently appeared in fashion shows for Kanye West and Max Mara, and as the rising star of modest fashion she was mobbed by fans after her London catwalks eager to talk to her and have their pictures taken together.

What is modest fashion?

For those new to modest fashion, the diversity of styles was a real eye-opener. The designers adhere to Islamic dress codes, which require men and women to dress and behave modestly when in the company of unrelated members of the opposite sex.

As Kerim Türe, CEO and founder of modest fashion giant Modanisa, said this sector is all about giving “more choice to women who prefer to wear modest fashion, allowing them to look elegant without compromising their beliefs.”

For women who choose to cover up, this means wearing clothes that do not reveal their body shapes.  Essentially their clothes should cover their arms and body down to their ankles. Many will also don the hijab (literally meaning a veil) to conceal their hair, commonly regarded as an integral component of a woman’s outfit as laid down in Koranic text.

Some Muslims view the Islamic scripture differently, believing it also requires the covering of a woman’s face: “And say to the believing women that they should lower their gaze and guard their modesty: that they should not display their beauty and ornaments, except what (ordinarily) appear thereof.” (24:31)

The script is vague enough to allow a variety of interpretations on what constitutes women ‘guarding their modesty’. Not surprisingly, several modest fashion designers at Olympia took a more liberal approach and skipped the hijab altogether.

“The shows illustrated how diverse modest fashion style is”

As Franka Soeria, a co-creator of Modest Fashion Week, said: “The shows illustrated how diverse modest fashion style is. Some designers were heavily defined by cultural influences, while others fused East-West elements, producing modern daywear and glamorous evening dresses that adhere to Islamic principles, yet appeal far beyond.”

And of course it’s not just Muslims, but women from other faiths and those of no faith who like to dress more conservatively that has resulted in a boom in modest fashion, now globally worth £300bn. In fact, there are many pieces on show at Modanisa London Modest Fashion Week (MLMFW) that would appeal to any fashion lover.

Given the huge variety of styles and with summer coming, we asked an expert to help identify the catwalk looks that are most likely to cross over into high streets and haute couture shops this season.

As the days get longer, lighter and warmer, so we see softer shades appear in our daywear. From Aidijuma’s hijabs in pink and mint green, and Flluame’s yellow jump suit, through to more neutral tones such as beige and light grey for headwear and outer garments, as we saw in Abacı’s designs.

Warmer weather makes everyone more health-conscious. For those who like to swim, go to the gym, or simply want to keep that sporty look, two labels from MLMFW should appeal: Turkey’s Mayovera’s stunning range of burkinis included the baby blue starfish suit worn by Halima Adem, while Britain’s Under-Rapt made its catwalk debut with a collection of organic, breathable sportswear and althleisure.

Fashionistas are spoilt for choice with summery chic daywear that would look good in the office, or for socialising. Refka, Gulshaan, Helen Latifi, Pillar, Norish Kareem presented outfits that are perfect for women wanting to blend into modern, multi-cultural societies without compromising their beliefs.

Those wanting to make a strong statement will enjoy this season’s striking array of bold ethnic and contemporary prints. British designers Farrah Naaz and Pillar led the way with their authentic, pretty designs for dresses, skirts and jackets, enabling women to exude a mystical ethno-glam they can dress up or down.

Checkered designs, from gingham to plaid, also featured on the catwalk. These bold patterns require a little thought so your new jacket, trouser or dress doesn’t turn you into a picnic blanket! Designers Refka and Pillar show how it’s done with their casual attire that oozes with adult cool.

As ever, one of the big talking points from Modest Fashion Week was the headwear. There were plenty of examples of both conservative and contemporary styles. Indonesia’s Si.Se.Sa label wowed with their pioneering syar’i lines in a mix of pastel and earth tones. Gulshaan worked the headscarf into rural and urban looks, while there was a touch of flamboyance in Helen Latifi’s turbans and Darrelina’s hat and scarf combinations.

Bell-sleeves are back! Perfect for the warm summer months, they featured in collections by Darrelina, Gulshaan and Norish Kareem . So ditch your straight cuts for head-turning flared sleeves on blouses and shirts, and match these with an elegant skirt or trousers to make a strong yet subtle statement.

Ruffles were another retro look that was big at MLMFW, championed by Abacı and Flluame to name but two. A throw-back to the 70s, these wavy frills embellished tops, dresses and skirts to create a playful, feminine and cute look.

Muslimah fashion not only offers elegance, but also a real sense of luxury for women throughout the day. Among the strongest exponents of this on the catwalk were three Malaysian designers: Fatin Suhama, Rina Salleh, and Nafyana by Liyana Ghaus. Beautiful flowing gowns and two-piece skirt and trouser suits celebrating the full spectrum of light summer colours.

Summer is wedding season and there were plenty of gorgeous evening and special occasion dresses on show in London from the likes of Minel Aşk, Selma Sarı, Som Fashion, Flluame, and Saiqa Majeed. Their styles varied hugely, as did their colour palettes, from warm autumnal tones such as gold and red, to lighter, brighter shades of pale blue, peach, and pinks. Each of these custom-made outfits is guaranteed to make the wearer look and feel fabulous and glamorous.