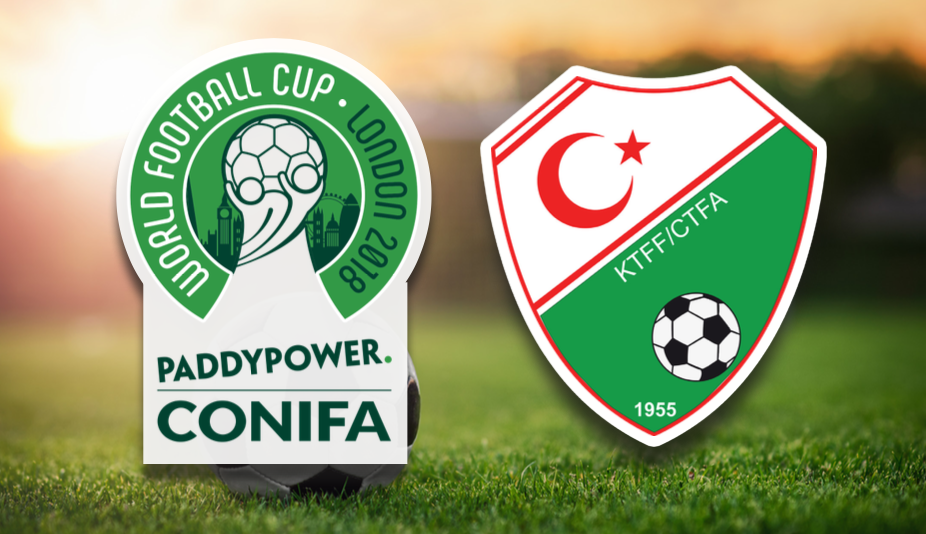 The Paddy Power CONIFA World Cup kicked off in London on Thursday, with sixteen teams from around the world competing for the trophy. None of the territories they represent are recognised by FIFA, which denies them entry into its tournaments.

Filling this gap is the Confederation of Independent Football Associations, which was launched in 2013 to offer footballers from these regions a chance to compete internationally. A preview piece by The Times earlier this week led with the title, ‘Rebel world cup ready for kick-off in London’, reflecting the fact these are politically “unrecognised nations, independence-seeking regions, minority communities, and various diasporas, together representing 334 million people.”

One of the best known ‘rebels’ is North Cyprus. They are one of the tournament favourites, although they will need to step up following a lacklustre opening game performance  against Kárpátalja, which ended in a 1-1 draw.

Drawn in Group B, the Turkish Cypriot national side face Kárpátalja from Ukraine, Tibet, and reigning CONIFA World Champions Abkhazia, from northwest Georgia. All three of its group games are being played at Enfield Town, which should prove to be a ‘home from home’ as the North London borough boasts one of the largest concentrations of British Turks in the country, where an estimated one in five residents speak Turkish.

T-VINE’s İpek Özerim caught up with Ramadan Ismail, a director at Enfield Town Football Club, to ask him what fans can expect from a trip to this non-league club during the ‘alternative world cup’.

Was it pure luck that North Cyprus ended up playing its CONIFA World Cup games at Enfield Town?

Many people will look at my name and conclude ‘Ramadan was instrumental in bringing Northern Cyprus to play at Enfield Town FC’. However, that’s not the case, as first and foremost I am a director of Enfield Town FC. My 11 fellow directors and I made a collective decision to engage in a commercial deal, which would allow CONIFA to play some of their tournament games at our Queen Elizabeth II Stadium in Donkey Lane.

I’ve lived in Enfield for 50 years and this is my home. And yes, I’m very proud of my Turkish Cypriot heritage, so you can imagine my soppy emotions when CONIFA decided that all three Northern Cyprus group games will be held at my beloved Enfield Town FC.

The decision by CONIFA for Enfield to host Northern Cyprus was also obviously beneficial for them too, due to the large Turkish community in Enfield and the surrounding areas. I’m personally pleased that the Enfield Town stadium is being used to inspire and motivate the local community, including Turkish Cypriots from not only our borough, but also the surrounding areas to engage with the CONIFA tournament as a whole.

When was Enfield Town FC established, and what’s been its biggest footballing achievements?

Enfield Town was established in 2001 following supporters splitting from the now defunct Enfield FC. To cut a long story short, supporters at the time felt the then Chairman wasn’t leading the club in the right direction. The supporters held a vote, where 92% agreed to break away from Enfield FC and form Enfield Town FC.

We have become an iconic club since then, as Enfield Town is the country’s first-ever senior football club owned and run by supporters. Since our formation, better-known clubs such as Portsmouth, FC United of Manchester, and AFC Wimbledon have all followed suit.

I’d say the biggest ever achievement was moving from our ground-share arrangement with Brimsdown Rovers to owning our current home, the Queen Elizabeth II Stadium at Donkey Lane, back in 2011. This was entirely down to the effort of the club’s supporters and volunteers.

Has the club been associated with any famous players or managers?

Not really. We had Darren Purse as a player/assistant manager last season. He previously played for Birmingham City/Cardiff City, with more than 600 appearances during his professional career. He scored an injury time cup final equaliser for Birmingham v Liverpool in 2001, and was also in Cardiff’s FA Cup Final squad a few years later.

Otherwise, Corey Whiteley moved two years ago from Enfield Town and played for both Dagenham and Redbridge, Ebbsfleet United in the National League. We are still searching for either that England / Turkey captain that will one day lift the World Cup.

What can Turkish Cypriot visitors expect at Enfield Town?

There is a lot of space at the Queen Elizabeth II Stadium, including a running track. Our capacity is 3,000. The supporters have cunningly placed the standing shelters inside the curve of the running track, enabling fans to be as close to the action as possible.

For those who prefer to be seated, we have a 104-seater heritage-registered grandstand, and 150-seater lower singular stand. We have a humble bar that serves Efes Pilsner, and there will be hot food with a Turkish BBQ theme.

Describe your role at Enfield Town

I’m a fully-fledged director and lead the club’s community section, where we provide football for practically everyone of all abilities, ages and of course sexes. We run a football school for boys and girls aged 4+. We also offer Walking Football for predominantly the over 50s, but accept all ages, and disability football for those living with Dyspraxia and Cerebral Palsy. We have lots of youth teams for boys and girls.

I’ve also managed the Senior Sections – the U18s, U21s, and Reserve teams, and taken three First Team games in friendly and minor cup fixtures. I hold a current UEFA B Coaching License. However, I no longer coach, that’s history.

We average around 405 per home game, but a successful title-challenging Enfield Town could comfortably double that total. A late run to the playoffs a couple of seasons ago saw us pull in regular crowds of 700-900 for the last half dozen games.

What are the club’s feelings regarding the CONIFA World Cup?

The Enfield Town fans have really taken to CONIFA, with many offering to help out as stewards and other general help. It has really brought the club together, which makes for more exciting anticipation.

I’ll certainly be at all three North Cyprus Group B matches at Donkey Lane, along with my immediate family and my 82-year-old mother, who insists she wants to attend too. For us Turkish Cypriots, this event is a fantastic inspiration, which both CONIFA and Enfield Town can stake claim too.

I’ve always supported Turkey at the Euros and World Cup Finals, closely followed by wanting England and the UK Home Nations to do well too. We [UK Turkish Cypriots] now have a wonderful opportunity to support a Turkish Cypriot team, albeit in an ‘unrecognised countries and regions’ competition. Our own team representing who we are and our Turkish Cypriot heritage.

CONIFA gives us all a golden opportunity to get together, enjoy some kebab and a bottle of Efes beer or two with diverse fans from other cultures and nationalities also taking part in the tournament, and football fans wanting to sample something different.

So no excuses, come along and enjoy the first of two World Footballing Cup competitions of the summer, and I can promise there will be at least a vastly better goalkeeping standard on display than what was seen in the Champions League Final.