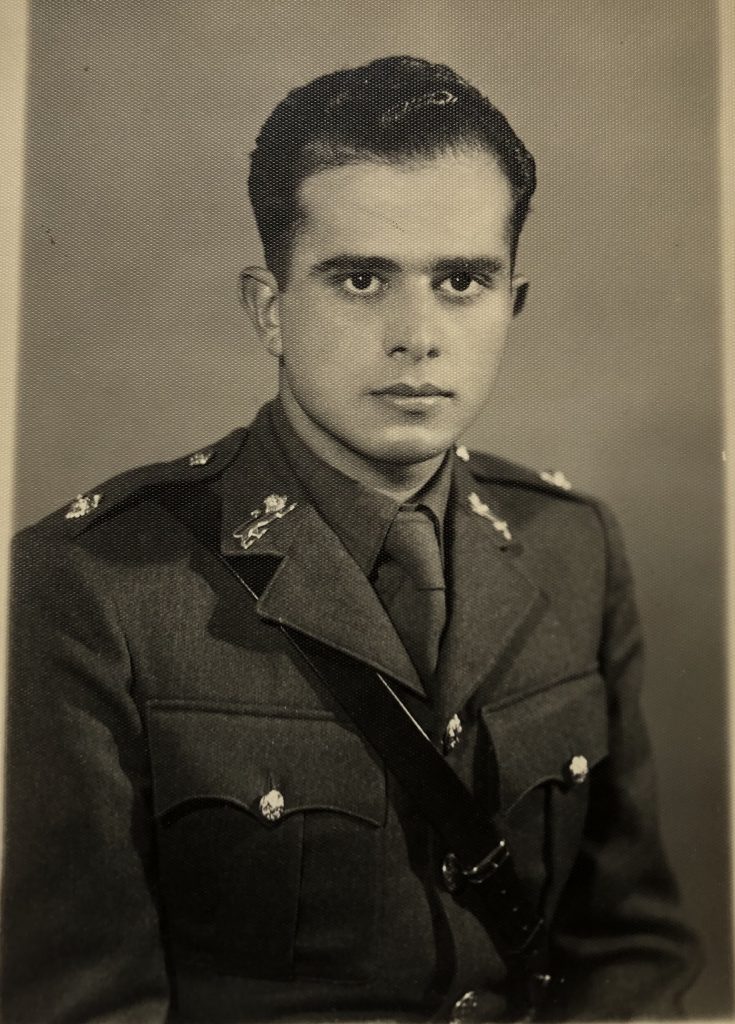 In 2016, T-VINE Magazine set out to discover stories about the Turkish Cypriot community’s contribution to Britain as military and civilian servicemen and women during World War 2 and subsequent conflicts.

One of the most moving and extraordinary stories was that of Cemal Mustafa, a gifted young man who could turn his hand to anything and do it brilliantly. When the Second World War broke out, Cemal signed up to the Cyprus Volunteer Force’s Military Engineering Company and trained as bomb disposal expert. He kept his family abreast of his adventures, but suddenly a letter came that would change everything forever.

This never-before-told story is captured by Sibel Sermet while in conversation with her father and Cemal’s younger brother, Sermet Mustafa during the summer of 2021

Mr Mustafa was a former Consul General to the London Representative of the Turkish Republic of Northern Cyprus, from 1983 to 1988. Now in his nineties, he offers a heartfelt account that peels away the delicate layers of this family secret. With her father’s blessing, Sibel shares this remarkable tale.

My father Sermet, his older brother Cemal (spelt Djemal in British military records) and their three sisters were born in a house in a quiet corner on Akkavuk Mahallesi, Lefkoşa / Nicosia. Theirs was  a peaceful, happy, close-knit family.

The house was always filled with music, singing and laughter. Their neighbourhood was typical of old Lefkoşa where everyone took care of each other and shared what little they had, in the good times and the bad. My father always reminisces about how there was always the smell of jasmine in the air in the summer months.

Their mother, Hifziye Mustafa Barutcular, was a skilful, self-taught seamstress. Her husband, Mustafa Ibrahim was a Sergeant Major in the Mounted Police. He played the cornet in the police band. The couple encouraged all their children to be active in the arts.

One of my father’s sisters, Aunt Tegiye, played the violin and loved to paint watercolours. She studied at the Victoria Girls’ High School (‘Lise’) and spoke very good English, but tragically died very young during childbirth. Another sister, Aunt Zehra, was a very talented seamstress like her mother. Aunt Mesadet loved to crochet. My father was, and still is, passionate about oil painting.

Uncle Cemal was born in 1920 and attended the English School in Lefkoşa and, when my grandfather died of pneumonia in 1943, he became the family’s main breadwinner.

He was academically brilliant and had beautiful handwriting. He was a talented artist who enjoyed sketching in pencil and also played the clarinet. He was an expert at repairing things, mainly watches and clocks. He even made telephones linking one room to another in their house. One of my father’s earliest memories of his brother is when my uncle’s school had a competition and asked the students to bring flowers from their gardens. He took pomegranate blossoms and won first prize.

In 1937, while he was still attending the English School, Uncle Cemal was selected, along with a Greek Cypriot and an Armenian student, to represent Cyprus at King George VI’s Coronation. They sailed to England and stayed at King George’s House on Stockwell Road in London.

During their trip, they went to see Irvin Berlin’s musical “Top Hat”. My uncle already knew all of the songs in the musical, but the song “Cheek to Cheek” was his favourite. It was a major event in his life to see it performed on stage.

He was a keen follower of the popular music of the time and would sing songs like Vera Lynn’s “Yours till the stars lose their lustre” with my father. My father was very close to his brother and they shared a love of music which my uncle helped to nurture.

Uncle Cemal finished school in 1939 and took up a clerical position in the Public Works Department. When war broke out, the British government offered an automatic promotion upon their return to anyone who volunteered to join the army. So, in 1940, he joined the Cyprus Volunteer Force’s Military Engineering Company and was sent to Egypt to train as a bomb-disposal expert.

When he returned to Cyprus, he was first promoted to Sergeant and then to Lieutenant and, in 1944, was sent to the Greek islands to clear German land-mines. Just before he left, his mother suffered a stroke, which had an impact on her health for the rest of her life.

Uncle Cemal sent his family letters telling them how he was doing. He was on Kastellorizo (Meis) just off the Turkish coast and he told them not to worry, that he was fine and was going to the Turkish Officers’ Mess on the mainland most evenings where he and his fellow soldiers could relax and enjoy themselves.

Just a few days after receiving this letter, on the first day of Bayram (Eid) in November 1944, my father and his family were preparing a traditional kebab barbecue when there was a knock at the door. My father remembers that terrible day very vividly and in fact, ever since, he has always found Bayram to be a very melancholy, distressing time of year.

His brother-in-law, or enişte, opened the door to two high-ranking army officers who gave him a letter.  His enişte opened the letter and started to cry, tears streaming down his face.

My father took the letter from him. His English was very good and he read that Uncle Cemal was “fatally wounded”. In his young mind, he interpreted it to mean that his brother was just wounded and that it was not serious. But the truth was that he had been killed. Uncle Cemal had stepped on a land-mine which exploded. He was 23 years old.

The family did not tell my grandmother.  They were afraid that the she would not survive the heartbreaking news. Instead, they told her that he had been wounded and was undergoing treatment in London. It was the beginning of a very difficult time for the family.

My uncle’s coffin was sent to Cyprus, wrapped in the Union Jack. His funeral was held at the Selimiye Mosque in Lefkoşa, with full military honours and was attended by hundreds of people.

My uncle was much loved and admired by everyone. As a student, he had always helped the elderly and the poor. He would raise money by putting on plays by Namık Kemal, which would be performed by young people. He would distribute the money that was collected from these plays amongst the most needy.

In his letters to his family while he was in the army, he would ask how elderly residents in the neighbourhood were doing.  He cared deeply about his community. Even to this day, people who attended his funeral talk about how crowded it was.

One of the families that he helped happened to be my maternal grandmother’s family. My grandmother was born in 1923, and passed away a couple of years ago. Her father died very young, leaving my great-grandmother to raise nine children on her own. My grandmother distinctly remembered my Uncle Cemal, as he would pass by their house to give them money that he had raised. She and her family had attended his funeral and she even remembered seeing my father there that day.

My uncle was buried in Kaymaklı, Lefkoşa but in 1963 it was occupied by Greek Cypriots and many citizens were killed. The cemetery where he was buried was ransacked and as a result, we no longer know where his grave is. We have been to the cemetery with my father to try and find it, we have asked members of the family if they could give us some idea as to its whereabouts, but we have never been able to find it.

For years after his death, from 1944 until my grandmother’s passing in 1965, my father would write letters once in a while, as if they were from my uncle, and he would read them to his mother. We cannot imagine how painful that must have been for my father. Whoever came to the house was sworn to secrecy and to hide the truth about his death, all in an effort to protect my grandmother. Until the day she died, she lived with the hope that one day Uncle Cemal might return.

My father says that when he learned of his elder brother’s death, he wanted to die too, so he could be with him. He physically felt that he could not go on without his brother.

When uncle Cemal was in the army, he earned £25 a month. He would give my father two and a half shillings a month pocket money. My father now talks about how he would be so excited when he received it every month and how he would spend it on sweets and the cinema. He loved going to the cinema to watch the films of Hollywood stars like Fred Astaire, Gene Kelly, Rita Hayworth and John Wayne.

My father found letters that uncle Cemal had written to a girlfriend, which the family did not know about a few years after his death. It was another reminder of a life cut tragically short.

My father was a young boy when he lost his brother and when he left school, he became the main breadwinner of the family.

In 1954, he won a scholarship to study aeronautical engineering at Siracuse University in New York. He bought his ticket to the USA but when the time came for him to go, he could not bring himself to leave his mother. He felt he wanted to fill the huge void uncle Cemal had left. My father’s dream of becoming an engineer was never fulfilled.

Instead, he became a civil servant and served in various government departments including the Public Works Office where his brother had worked, the Ministry of Natural Resources, and the Audit Department. From 1963 to 1967, he was Liaison Officer to the Vice-President of the Republic of Cyprus, the late Dr Fazıl Küçük. In 1973 he became the First Secretary to the Turkish Cypriot Mission in London. In 1983, he was promoted to Consul General in the same office.

My mother and father got married in 1966 and have three daughters. He retired from the civil service in 1988.

I always think that my father lived the life that my uncle would have lived had he returned from the war. That somehow his legacy lived on through my father. That he would have had a successful career in the civil service, fallen in love, got married, had children and lived to a ripe old age.

Like many other Turkish Cypriot soldiers who served in the British army, he did not make it home, but their memories will live on in our hearts forever.