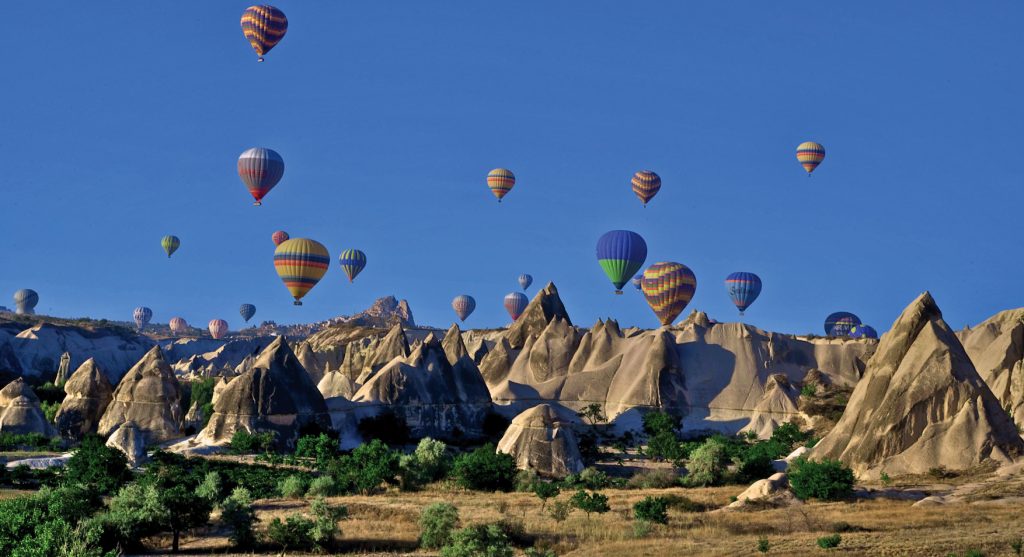 Demand for a balloon ride above the spectacular lunar-like landscape of Cappadocia has soared over the past 12 months. Figures released by the Directorate General of Civil Aviation shows 537,500 tourists took a hot air balloon tour over the popular central Turkey destination – an increase of 63% compared to 2017.

Anadolu Agency (AA) reports the increase has boosted Turkey’s tourism coffers by nearly $80 million. There are 25 hot air balloon operators in Cappadocia, charging between 120 euros (£108) to 150 euros (£135) for an hour-long flight.

Talking to AA, Mustafa Durmaz, an official from the Cappadocia Tourism Development Cooperation, said: “Almost 90% of the visitors [to Cappadocia] wanted to take the balloon ride. It makes a great contribution to the economy, and it also provides employment opportunities in the region.”

A UNESCO World Heritage site, Cappadocia is famous for its chimney rocks, underground cities and boutique hotels carved into rocks.

It’s been a favourite for filmmakers too, with Ghost Rider: Spirit of Vengeance (2011) and Palme d’Or winner Winter Sleep (2014) among the movies to feature this unique landscape.

Hot air balloons have become a popular part of the experience for visitors seeking a birds’ eye view of this fascinating terrain. One hundred balloons are allowed in the air at any one time, creating an impressive sight.

Safety remains central to those licensed to operate hot air balloons, which are tracked by a GPS system to monitor their speed limit and distance travelled.