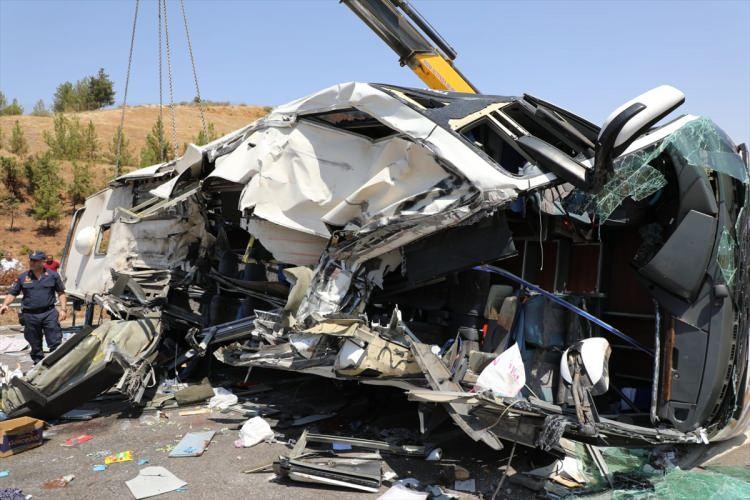 Two separate road crashes on Saturday, one in Gaziantep and one in Mardin, have caused the deaths of 36 people and injured dozens more, many seriously. The scale of the fatalities prompted many media to describe the two crashes as a “katliam gibi kaza” or ‘massacre-like crashes’.

The first reported crash was in the Nizip district of Gaziantep, where emergency teams were responding to a road traffic accident around 11am when their vehicles were hit by a passenger bus involved in another crash on the main Gaziantep-Nizip highway.

Initially, a car had lost control and overturned, ending up in a ditch by the highway. Firefighters and medical teams were quickly dispatched to the scene of the accident, and reporters from İhlas News Agency (İHA) who were passing by, stopped to cover the rescue operation.

While the rescue work was underway, another accident took place a few hundred meters away from the first incident.

A large passenger bus registered to a private tourism firm in Diyarbakir crashed and overturned, its speed propelling the bus to travel forward on its side for another 200 metres, where it rammed the emergency vehicles causing carnage.

Four paramedics, three firefighters and two journalists were among the sixteen people killed, with a further 30 injured. Of these, eight are said to be in a critical condition.

As Turkiye, which has a poor road traffic safety record, was coming to terms with the Gaziantep tragedy, reports came in of another devastating accident 155 miles east of Nizip in Mardin.

In scenes akin to a war zone, a speeding truck on a main road in an urban part of Mardin’s Derik district hit emergency services who were attending another accident involving three vehicles, and the crowd that had gathered following the first accident.

Terrifying footage shows the truck smashing into them and then hitting everything else in its way before it came to a stop. The horrific aftermath was captured on mobile phones, showing dozens of bodies and badly injured people crying for help as they lay on the road, with members of the public rushing to help.

Interior Minister Süleyman Soylu visited the site, where he confirmed to reporters that 20 people had been killed and a further 26 injured, many seriously.

A tweet by Turkish Health Minister Fahrettin Koca said the Derik accident had “occurred after the brakes gave out on a lorry, which hit a crowd.” Justice Minister Bekir Bozdağ has announced investigations into the two crashes.

Turkiye continues to have one of the worst road safety records in Europe. Some 5,362 people were killed in traffic accidents last year, according to the Turkish government.

In comparison, Switzerland, which has one of the best records in the world, lost just 227 people to road traffic accidents in 2020. Its annual road death toll since 2006 has not exceeded 384 people.

In 2020, by contrast, road traffic accident fatalities in Turkiye stood at 5,573, accounting for 1.43% of total deaths in the country. It meant Turkiye was listed 145 in the WHO (World Health Organisation) rankings for global road deaths.

Although still very high, the 2020 and 2021 figures show significant improvement from the previous five years. In 2015, a staggering 7,530 people died in road traffic accidents in Turkiye – a huge hike compared to data recorded for the previous nine years, where the death toll from road accidents averaged around 3,620 people per year.

Figures for road traffic accidents in Turkiye remained high in 2016 and 2017, with 7,300 and 7,427 people killed respectively, according to Statistica. There has been a steady fall in road traffic deaths ever since.

The Turkish government has introduced multiple measures to combat the scourge of fatal road traffic accidents. These include speed cameras and mandatory breathalyser tests for drivers involved in an accident.

Three days ago, the Turkish authorities also announced a raft of legislative changes to improve road safety. One of the changes will be to make wearing safety belts mandatory in mass transportation vehicles, such as buses, minibuses and taxis. Those flouting the law will have their vehicles banned.

The new regulation, which is part of a ten year- action plan up to 2030, will make wearing helmets mandatory for motorcycles and e-scooters, with these and cyclists all required to wear high-visibility clothing while riding at night.