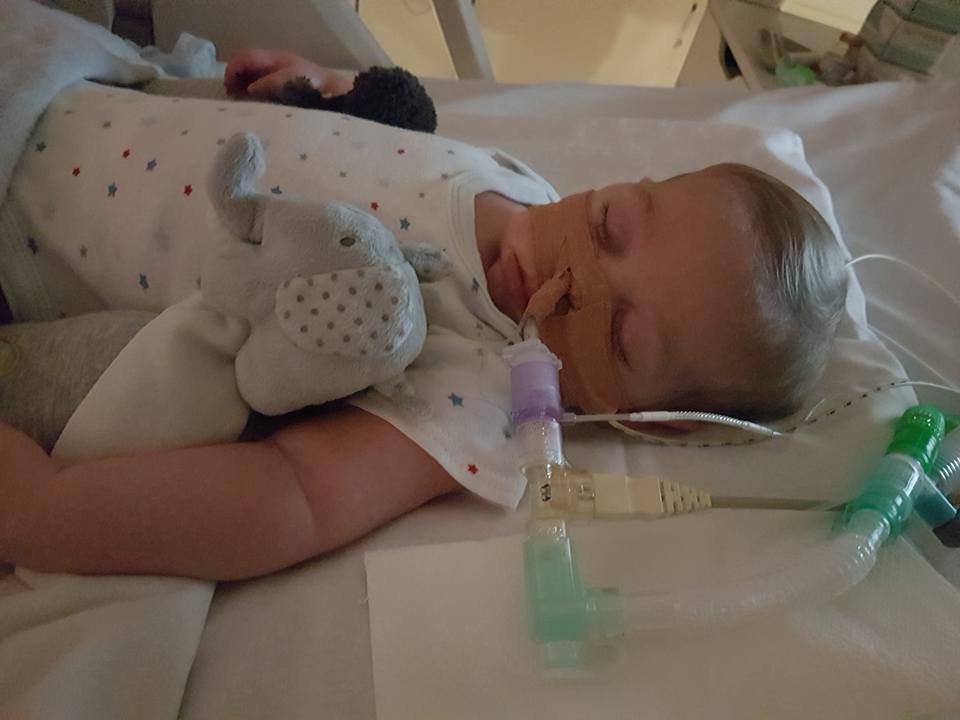 Originally from Croydon, South London, Ayla Azmi Işık is a married mum of one living with her family in Köyceğiz, Muğla, in southern Turkey. Earlier this year her son Enis, then aged 20 months, nearly drowned. Battling against the odds, baby Enis continues to make incredible progress towards a full recovery at İsparta Hospital. Watching the ordeal of Charlie Gard, who suffers from a serious genetic disorder, Enis’ mum Ayla speaks out on why Charlie’s parents were right to fight the doctors.

The case of Charlie Gard resonates with me so much. Until your baby is on a life support machine and doctors are telling you that the machines need to be turned off, you cannot imagine the excruciating and indescribable pain this causes.

I am deeply and sincerely sorry for Charlie’s family: his parents should have been allowed to choose what was best for their baby.

After Enis had his accident, my original hope had been to take him to a prestigious London hospital – a world-leader in its field. Many kind and wonderful people helped make that a reality by raising enough funds for us to transport Enis back to Britain. But my hopes were dashed when Enis’ Turkish paediatrician doctor and I spoke to a consultant from this hospital by teleconference.

After being told that Enis had been on a ventilator for six weeks, the British consultant said “we would have given up by now and turned off the machines”. I cannot describe to you how I felt that day. I really can’t. Imagine your heart being ripped out a million times and the pain will not even come close.

The Turkish doctor was also in shock at hearing his British peer’s comments. Turkey’s medical ethics do not permit such an approach. Turkish doctors will do everything in their power to keep someone alive and believe in leaving all life-and-death decisions to the parents.

“if Enis had been in the UK, he would not be alive today”

At the time of this call to the British consultant, Enis had managed to breathe for up to 15 minutes a day on his own and his EEG tests were showing improvements without any therapy or alternative medicine.

Fast forward another six weeks: if Enis had been in the UK, he would not be alive today. Yet my two-year-old boy is now breathing unaided for almost 20 hours a day. His EEG tests continue to show significant progress with frequency and waves in different areas of the brain. Although he can’t communicate through speaking, Enis moves his arms, head, eyes, and legs to show us he is listening. I one hundred percent believe he will continue to improve.

Thank God this accident didn’t happen to Enis in the UK. I compare my situation with that of Charlie Gard’s parents and know I would have fought just like them. But by having to focus so much energy on what became such a bitter battle with Great Ormond Street Hospital, Charlie’s parents were deprived of spending valuable time with their little son.

The NHS is in so many ways a great ‘free’ healthcare system. But clearly families are not ‘free’ to make important choices about their loved ones.

I am part of a parents’ support group who are going through the same thing as my family: near drowning of their children. Virtually all are based in the USA. It seems every parent in the group was also told to turn off the machines when their children were admitted to hospital. Thankfully those choices are left to the parents to make in the USA. Many of these same children are now at school, participating in sporting events, and enjoying a decent quality of life.

Parents are such a strong and important influence on their children’s wellbeing. They pick up on our feelings, even when they are in a coma.

Once Enis can breathe completely on his own and is out of what the UK deems the ‘risk zone’, I still intend to bring him back to Britain to benefit from leading therapies that Turkey currently doesn’t have. To be honest, I would take Enis to the moon if I knew it would improve his condition. My sole purpose in life is getting Enis the treatment that he needs to make a full recovery.

Going back to Charlie Gard, I’ve seen so many comments about it and everyone is entitled to their opinions. But until you have walked in their shoes you will never understand what Charlie’s parents have and are going through.

It was wrong that the family wasn’t allowed to seek out alternative medical support when they first requested it. All they wanted was a chance to try and save their baby boy. Instead they have had to spend weeks fighting doctors in court who insisted they let their son die. My heart goes out to them at this unbearably difficult time.

Doctors don’t always get it right. My little cherub wouldn’t be here if we had gone to Britain as initially planned. Yet Enis is living proof that there is always hope and faith and miracles do happen.