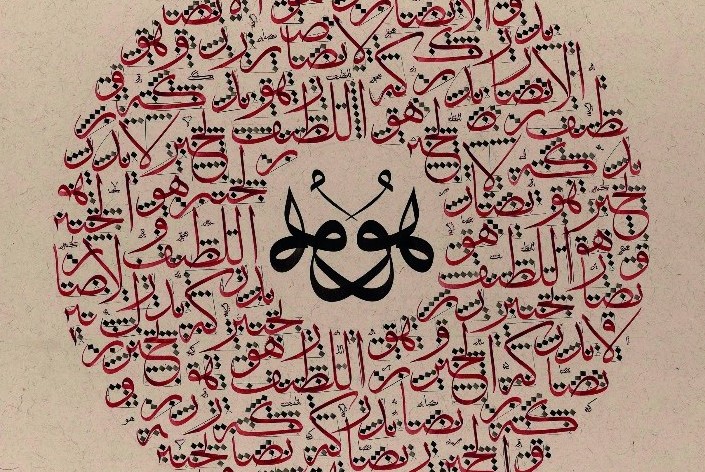 This Friday, the Yunus Emre Institute is hosting an evening talk and demonstration on Ottoman calligraphy. And from April, the Institute will be re-running its popular introductory course to Hüsnühat – the highest form of Islamic art and writing.

Those curious about the beautiful art of calligraphy can see two globally renowned experts in action in London this Friday at a talk entitled The Pen and the Letter.  Calligraphers Nuria Garcia Masip and Gulnaz Fatima Mahboob will be illustrating the different aesthetics of Islamic script by comparing the thuluth and naskh styles – writing traditions which date back to over ten centuries. 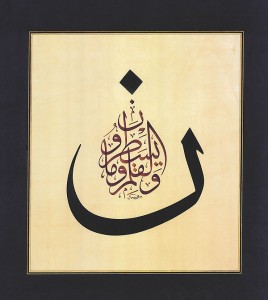 Admission is free, but pre-event registration is required. Light refreshments will be available before the talk and a chance to ask questions afterwards.

Nuria is a Spanish calligrapher belonging to the Turkish Ottoman tradition of Islamic calligraphy. Over the past sixteen years, she has studied with some of the greatest scholars of this school and holds her diploma (Ijazet) in the thuluth and naskh scripts from masters Mohamed Zakariya, Davut Bektas and Hasan Çelebi.

She is one of the few women to have won prestigious prizes in international calligraphy competitions. She also exhibits internationally and has given workshops and conferences in many different countries. She is based in Paris, where she teaches regular calligraphy courses. Her work can also be found in museum and private collections.

Gulnaz is a British calligrapher who teaches regularly at institutions and privately. She began her training in Islamic calligraphy in 2005 when she took a sabbatical from her research career. En route to Malaysia to learn about this sacred art, she was re-routed to Istanbul, the centre of learning for Islamic calligraphy. Here she was introduced to the world renowned Grand Master Hasan Çelebi and started her classical training under his instruction.

In 2012 she was awarded the Ijazet (diploma) in the thuluth and naskh scripts. Her background in anthropology offers a fresh perspective on the dynamic bond that is established between the student, the master, the letters and the repetitive practices.

Talk:     ‘The Pen and the Letter’ with Nuria Garcia Masip and Gulnaz Fatima Mahboob 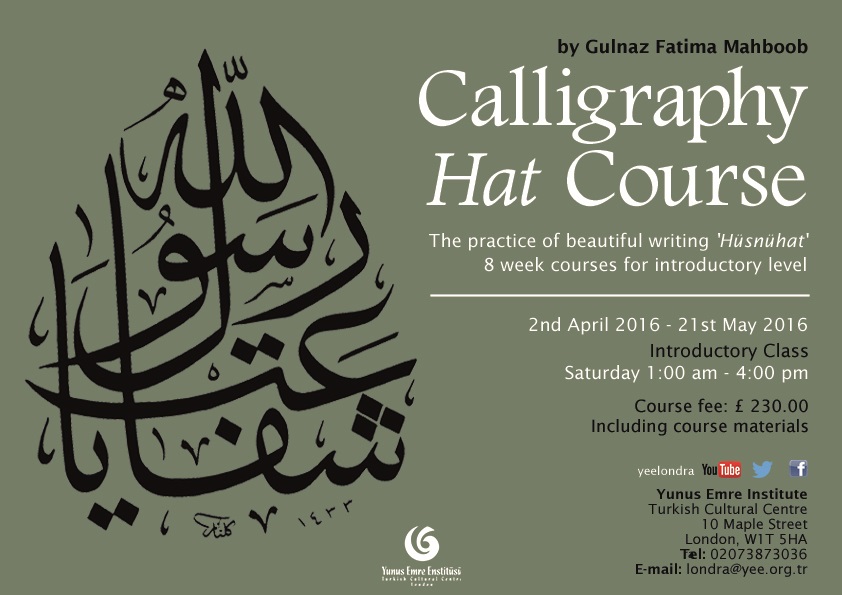 For those who are interested in learning the art of Ottoman calligraphy, the Yunus Emre Institute will be re-running its beginners course from this April. Held weekly on Saturdays, this 8-week course is an introduction to the beautiful artistry of Hüsnühat.

Expert calligrapher Gulnaz Fatima Mahboob will provide a step-by-step guide to writing the Arabic letters, showing how to construct each letter through basic strokes. There will also be an overview about the traditional practice, tools and materials used for hüsnühat, with the emphasis on physical hand instruction and demonstrations. Participants will be encouraged to explore and experiment with the relevant tools and materials, learn to cut and prepare a traditional reed qalam (calligraphy pen), analyse the measurements for the Arabic letters, practice the pen angles from thick to thin strokes, and progress through shapes to write out a basic alphabet.

The course starts on 2nd April 2016 and runs every Saturday from 10am-4pm for eight weeks until 21st May 2016. It costs £230, which includes course materials. The deadline for registration is 31st March 2016 and early applications are highly recommended due to limited spaces available on the course.

For the course registration form, and terms and conditions, please email: turkishinstitute@gmail.com or call Mrs. Emel Albayrak at Yunus Emre Cultural Institute on 0207 387 3036.