The dangers of identifying as “Turkish-speaking Cypriot” 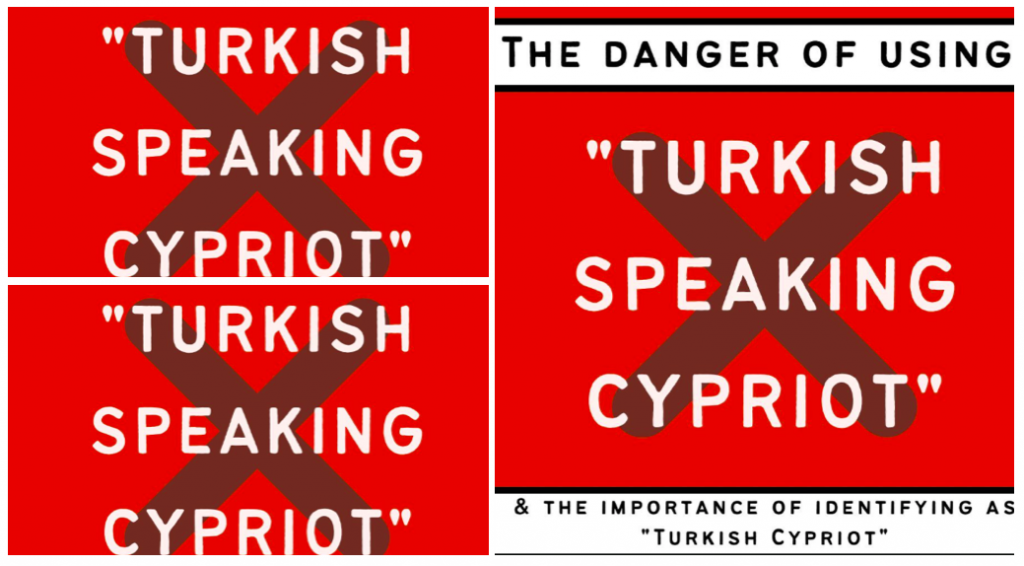 The identity of Turkish Cypriots is complex and multi-faceted, and it is often at the epicentre of the Cyprus Problem. Social media platform the Young Turkish Cypriots (Y.T.C) has recently given its two cents worth on the issue, with several posts dedicated to the importance of our unique identity and the dangers of portraying ourselves as a “Turkish-speaking Cypriot” (TsC).

These posts have sparked a lot of debate in our comment sections and even in mainstream media, with some trying to deliberately misrepresent the points Y.T.C. made. It’s an important conversation, and one that every Turkish Cypriot needs to consider given the political implications for their future on the island of Cyprus.

Firstly, the term “TsC” demotes an entire people to just a language. Yet our distinct Turkish ethnicity and roots are far bigger than this; they are a vital part of who we are.

It is this unique identity that is enshrined in the treaties and constitution that created the Republic of Cyprus in 1960, and which gives us equal sovereign rights today. By only emphasising “Cypriot”, we remove our visibility as a separate people and in turn undermine our political rights at the negotiating table.

These fears are not baseless. Just look at the Turkish community in Greece, which is a European Union member state. Despite having protected rights, the Turks of Western Thrace are constantly discriminated by the Greek state, as they are also denied their Turkish ethnicity, and instead described as “Greek Muslims”. As part of this government policy, Greek officials have closed the community’s Turkish schools, jailed their elected muftis, and threatened their politicians for challenging this state of affairs.

Sidestepping the terrible plight of the Turks of Greece, advocates of the “TsC” description tell us to “look to the future” and be “progressive” by re-staking a claim for our “Cypriot” identity. They say that many young Turkish Cypriots on the island are keen to accentuate this aspect of their identity as they forge a common path with their Greek Cypriot peers as their equals. Yet this rose-tinted view fails in the face of reality.

Following the outbreak of the Cyprus Conflict in 1963, Turkish Cypriots have been internationally isolated and the island has only been represented by Greek Cypriots. As a result, the word “Cypriot” is synonymous with ‘Greek’. It is totally intentional.

Hellenising the island is at the root of the conflict, a goal pursued jointly by the Greek Cypriot Orthodox Church, Greek Cypriot politicians and the Greek Cypriot public. Their mission is to eradicate all traces of Turkishness. This has been largely achieved in Greece, and Greek Cypriots would have also done it in Cyprus if it were not for Turkiye’s intervention in 1974.

SSadly, this Turkophobic mindset is very much present in South Cyprus today. Greek Cypriots use the Greek national anthem to the Cypriot one, and they venerate heroes who set out to unite the island with Greece (‘Enosis’) at the expense of Turkish Cypriots. They cannot even bear to use terms such as ‘Turkish coffee’, or ‘Turkish delight’, with the word Turkish removed at every conceivable juncture. Using the term ‘TsC’ simply plays into these bigots’ hands.

This attempt to re-engineer our identity by using terminology that erases our Turkishness is tragically also supported by the UN, the EU and foreign states. The long-term aim is for us Turkish Cypriots to sever ties with Guarantor Turkiye, which would make us even more vulnerable. Just look at the plight of the Palestinians, 80 miles away from Cyprus, forced to live in appalling conditions, their human rights systematically abused as the world looks on, because they have no protector to intervene and defend them.

Another reason why “TsC” is not appropriate is because not all Turkish Cypriots speak Turkish. This is true of much of the diaspora in Britain, North America and Australia, whose first language is now English, yet who all still identify as Turkish Cypriot. It’s also true of people from the villages of Kaleburnu and Lurucina, where historically they spoke Greek as their primary language, because of their location surrounded by Greek Cypriot villages.

Turkophobes like to distort the history though, claiming these villagers were formerly full of ‘Greek Cypriot women who married Ottoman soldiers and converted’, or were ‘Venetian Catholic Cypriots’ who had converted’. However, the facts do not bear out either of these claims.

The Ottomans kept excellent population records, and the vast majority of Turkish Cypriots can easily trace their ancestral roots back to central Anatolia, and to cities such as Konya and Harput, the Black Sea region, as well as to Lebanon, Syria, the Balkans and other parts of the Ottoman Empire.

Similarly, research by British Turkish Cypriot Ismail Veli, captured on the Families of Lurucina website, traces his home village’s history back to the 1600s, documenting the ancestral roots of over 8,000 people to a host of places across the Ottoman Empire. His findings counter the populist – and false – view that the Lurucina villagers were “Linobambaki” (literal translation: ‘cotton wooleys’), a derogatory term for Christians who identified as Muslims under the Ottomans to pay less tax and avoid discrimination.

After years of studying the available evidence, including the Ottoman census records, Mr Veli states unequivocally: “In spite of countless debates of conversions to Islam from the Christian faith, not a single person born [in Lurucina] between the period 1750 to the present [2011] have been found to have converted from Christianity to Islam. Considering there have been at least 8000 people recorded on the village family trees that is an amazing rebuttal of claim on the theory that the people of Lurucina converted to Islam.”

These historical facts aside, today everyone is free to identify as they choose and, of course, the criteria one uses to define ‘ethnicity’ can also vary. Yet, it is equally important to be aware of the dangers of the deliberate campaign to degrade Turkish Cypriot identity by deleting the Turkish part of our ethnicity, and the serious implications this has for our rights.

This issue is not only important for those on the island of Cyprus, it also affects Turkish Cypriots abroad. For people like myself, living in the United Kingdom, we endure daily discrimination by virtue of who we are.

We cannot fly direct, or trade or communicate directly with our Turkish Cypriot motherland. We face ridiculous obstacles and discrimination for activities such as registering marriages or repatriating our dead, if it involves the Turkish Republic of North Cyprus. As last year’s racist incident involving the TRNC flag outside the town hall in the East London borough of Waltham Forest showed, we are not even free to celebrate our identity. That is why we cannot stay silent on such issues.

Our fight for full equality is embedded in who we are and that is why we must never deny it. So we say it loud: Turkish Cypriot and proud!

This article is by Eren Ramadan, who is the founder of Young Turkish Cypriots (Y.T.C.), which can be found on various social media platforms including Twitter, Instagram and Facebook.