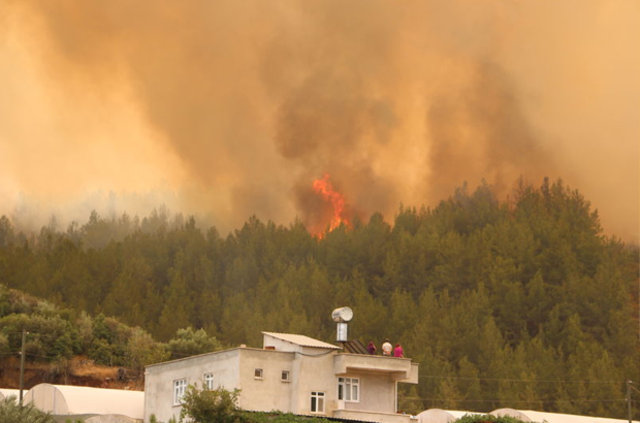 Turkey is battling a major fire in the Kumluca district of Antalya. People have been evacuated away from the path of the two-day old fire, which has spread to the resort town of Adrasan and Çıralı village, and entered the Beydağları Coastal National Park that contains the historic Olympos (Lycia) site.

İsmail Üzmez, head of the regional Forestry Board, believes the fire started in a greenhouse in the Erentepe neighbourhood in Kumluca on Friday. Two helicopters and a plane offered aerial support, as firefighters from Antalya Metropolitan Municipality and the Regional Forestry Directorate battled the flames on the ground.

Their efforts are being hampered by strong winds, which caused the fire to change direction and a second fire to take hold in Adrasan earlier today. Emergency services have taken precautionary measures, evacuating people from nearby residences and holiday resorts, including tourists at Olympos.

Many locals are reluctant to abandon their homes, some waiting until the flames are no more than 50 metres away as they try to rescue as many of their possessions as possible before the local Jandarma insist they leave for their own personal safety.

So far, the fire has burned through 150 hectares. Those returning to areas where the fire has been put out have found their properties completely gutted. One of them was Fatma Özbeyi, who told Habertürk TV:

“We’d come to sit here three to four times every week. My house is gone, reduced to ashes. Nothing of mine remains. My house contained all my possessions. I have lost everything I have saved for these past 30 years.”

Last Sunday, an equally devastating fire broke out in the Troodos Mountains in South Cyprus, prompting both Turkey and North Cyprus officials to offer their help.

Even though Ankara does not recognise the Greek Cypriot-run Republic of Cyprus, it pledged to send two planes to assist teams of emergency services battling the fire, which had quickly spread from Evrychou (Evrihu) southwards and led to two firefighters losing their lives. The “disaster diplomacy” move was universally welcomed.

Hopes for reconciliation were soon dashed when it became clear President Anastasiades had added preconditions to accepting Turkey’s aid. Aware of the political sensitivities on both sides, President Akıncı acted as a broker between Ankara and South Nicosia, confirming that the Turkish government had accepted their planes would be co-ordinated by the Greek Cypriot authorities as part of the wider international emergency operation.

However, Anastasiades also insisted the Turkish planes not use Ercan airport, but instead land and take-off from Larnaca airport. He also did not want them to use any Turkish water, even though the heart of the fire was just 6 miles from Lefke in the TRNC.

The refusal has upset Turkish Cypriots, who were already shocked that it had taken Anastasiades three days to respond to his neighbour’s offer of help, preferring to receive emergency teams much further away including from Britain, Israel, Greece, Italy, France, and Russia.

“When this fire broke out, we saw it wasn’t coming under control and passed on our offer to help. We wanted to send a plane and helicopter. Yet even during such a sensitive time, the Greek Cypriot side tried to leverage an advantage.”

President Akıncı also expressed his dismay in a statement issued on Wednesday:

“For the past five days we’ve put aside all political considerations and tried to play our part in averting a major environmental disaster.”

“In such circumstances, our logic cannot be dictated to by established political and diplomatic frameworks, our logic should be determined by reason and humanitarian values.”

The TRNC President said he had tried in vain to find alternatives to the various objections Anastasiades had raised about Turkish aid, including offering different landing spots to Ercan in North Cyprus, and opening up water supplies to all emergency teams involved in the fire-fighting effort.

The Turkish Cypriot leader said that in his eyes, having already secured Ankara’s agreement for Greek Cypriots to co-ordinate all emergency teams, trying to further politicise where emergency vehicles landed and took off made “no sense at all”.