Mandatory quarantine in government approved centres will continue for travellers arriving in North Cyprus from coronavirus Category B and Category C risk countries.

However Turkish Cypriot citizens, students, and those with residency or work permits for the Turkish Republic of North Cyprus (TRNC) will no longer have to pay for their quarantine.

Those from Category B countries, which includes Ireland, Germany, Turkey and the United Kingdom, must quarantine for a period of 7 days, while those arriving from Category C countries such as Azerbaycan, Iran, Kazakhstan, and USA – deemed ‘high risk’ – will be quarantined for 14 days.

The current measures, initially introduced on 7 September to contain coronavirus following a huge spike in new cases, will continue until 1 November 2020 when they will be reviewed again by the Contagious Diseases Executive Committee, which is headed by TRNC Health Minister Dr Ali Pilli (pictured above).

The announcement about mandatory quarantine was made by the TRNC Health Ministry earlier today, 29 September. The decision about quarantine fees was made at a Council of Ministers meeting last week.

While the removal of quarantine fees for TRNC citizens, students and permanent residents will be welcomed by all, the news about mandatory quarantine in government-approved centres is a blow for British Turkish Cypriots and foreign residents who were hoping to self-isolate in their own properties.

Currently, all new arrivals in North Cyprus are taken from the sea port or Ercan Airport to their designated centre, solely determined by the government.

Although everyone has been charged the same fee for their 7- or 14-day stay, which includes three meals and water a day, the standard of accommodation varies widely. Government-approved quarantine centres include 5-star hotels such as the Colony and Malpas, 3-star hotels such as Güneş Rezidans and Olivia Palm, through to student digs.

There have been numerous complaints about the lengthy delays travellers have before being admitted into quarantine accommodation, which has seen some people made to wait for up to 8 hours outside, often in hotel car parks, until rooms are ready. Complaints have also been made about the poor standard of food, served cold in some centres, and poor facilities, such as no kettles. 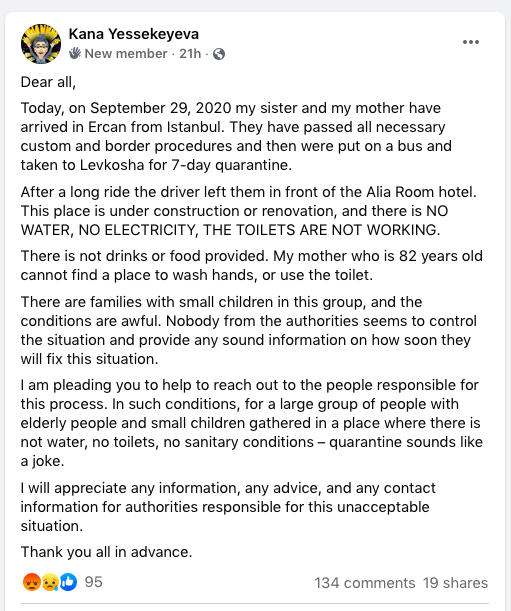 In one recent case, a person called Kana Yessekeyeva posted in Facebook group WTF Northern Cyprus that their mother and sister were being quarantined in a half-completed building in Lefkoşa lacking electricity, hot water and working toilets.

Despite pledges from the Prime Minister Ersin Tatar back in June about an investigation and action following the shocking treatment by TRNC officials of elderly Brits arriving back to their homes in North Cyprus after lockdown restrictions were lifted, these problems do not appear to have been addressed. New arrivals continue to experience the same issues as those who complained back in June.

The TRNC Health Ministry has sole responsibility for determining which accommodation is approved for use as a quarantine centre. It is not clear what criteria it used for its selection.

Another anomaly is that the Ministry appears to have decided to bypass kitchen facilities at most accommodation centres by insisting meals for those in quarantine are pre-prepared and delivered by an outside caterer. People are not asked if they have any dietary requirements, including allergies.

T-VINE has repeatedly asked the TRNC Health Ministry PR team for a response to these complaints, but has yet to receive any reaction.