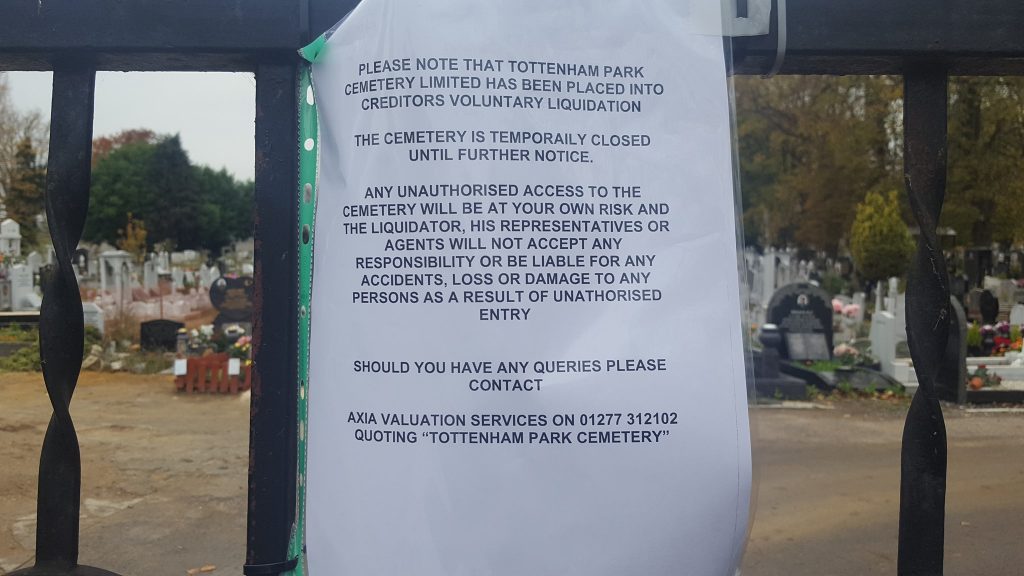 Tottenham Park Cemetery, in Edmonton, North London, is Britain’s biggest burial ground for Turks with thousands of people from the community buried there since the 1950s. The news will come as a shock to relatives, who have already been locked out of the site earlier this year following health and safety concerns.

The full text of the notice reads as follows:

“Please note that Tottenham Park Cemetery Limited has been placed into creditors voluntary liquidation. The cemetery is temporarily closed until further notice. Any unauthorised access to the cemetery will be at your own risk and the liquidator, his representatives or agents will not accept any responsibility or be liable for any accidents, loss or damage to any persons as a result of unauthorised entry”.

The notice ends by stating those who have any queries should “contact Axia Valuation Services on 01277 312102 quoting ‘Tottenham Park Cemetery’.”

Many relatives are querying what the liquidation means for them as leaseholders with burial plots on the site, with several airing their distress at the development. One lady, Vijdan Viv Hussein, wrote on Facebook:

“Today is what would have been my late dads [sic] birthday due to circumstances I wasn’t able to go cemetery today but was planning to go on Sunday, I would now be devastated if I can’t as I have felt emotional all day with my memories”.

For years, friends and relatives of those laid to rest at the cemetery have been deeply unhappy with the poorly maintained site. Large funds were raised by the Turkish Cypriot community to enable a road to be built linking the site to the main road, and for taps and other facilitiesto be added. In the absence of staff maintaining the site, community volunteers would also regularly carry out clean-ups at the cemetery. However, with plots costing on average £3,500 each, some relatives were angry the landowners were not taking responsibility for the privately-owned site.

In 2017, dozens of aggrieved relatives came together to form an action group to campaign for the Ministry of Justice and the local authority to intervene to improve conditions at the site. As a result of their complaints, which included documenting the various trip hazards at the cemetery and serious concerns about a possible risk to life should a damaged spire on an old and disused chapel fall down, health and safety inspectors visited Tottenham Park Cemetery in February 2018 and concurred with these concerns. The landowners were issued with notices about the vital repair work needed.

The cemetery, which dates back to 1912 and measures 2.4 hectares, remained closed for just over a month as these urgent repairs were carried out. However, when the site reopened on 19 March visitors were dismayed to see many of the original problems had not been addressed. These include graves so densely packed that it is difficult for people to access, uneven paths, and broken masonry from old graves still strewn across the site.

More recently the cemetery has hit national headlines after being mired in controversy following the discovery of human bone fragments. This coupled with the disappearance of older graves prompted some to fear that plots were being dug up unlawfully to create space for new burials in the virtually full cemetery – charges the owners have strongy denied.

The Tottenham Park Cemetery Action Group continued to lobby the local authority, Enfield Council, local politicians and the Ministry of Justice to take action to remove control from the current owners. A protest was held by the cemetery’s main gates on 3 November, when the press were told the Ministry of Justice had agreed to meet with representatives of the TPCAG later this month.

A week later, on 11 November – Remembrance Sunday – HusaynHashim El Bakayi, a well-known Turkish Cypriot and Muslim cleric, led members of the Turkish community in prayer for the 39 servicemen who had fought for Britain in the two world wars. Although they are buried at Tottenham Park Cemetery, these war heroes graves are no longer visible on the site.